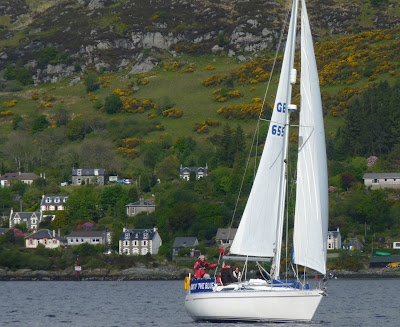 The forecast for Saturday was not particularly promising and those of us who left home on the morning of the Tarbert race did so in fairly heavy rain.  By the time of the start off Kip there was at least 25kts SW and building in the gusts. Don and Marge Gillies had bravely volunteered to man the committee boat in uncomfortable conditions while the mooring dragged into shallow water.  Martyn Webster in the classic 'Shona' was two crew down and struggling so much with Shona's enormous mainsail that he had to give up.  Neil on Camus Bosta also had problems with his reefing lines and had to retire on the start line and opted to motor. This left Aquaholic, Troikka, Out of the Blue and Silverjack as the remaining starters of what had been, on paper, quite a healthy entry.  The first hour was a rather unpleasant beat towards Toward with one or two particularly nasty squalls but after that conditions improved while the passage into the East Kyle turned into the inevitable beat where eventually Troikka and Aquaholic had the pleasure of overtaking the fleet of property developers on their challenge weekend.  Black Pepper had followed on and finished the Class 3 pair somewhere near Colintraive in order that they might reach Tarbert in time for the festivities while Aquaholic and Troikka continued their sail in a remarkable variety of conditions into Tarbert where, enjoying sunshine in the cockpits, typical Serpent socialising commenced.  This carried straight on to further socialising in the gazebo where those who had opted to drive up were to be found and thence on to the Starfish restaurant where the Commodore addressed the assembled multitude with apologies to the regular diners. If anyone has any photos of the day please email them to serpentyachtclub@gmail.com.

Sunday dawned with clear blue skies, a perfect 10kt breeze and enthusiasm among the Ladies for their race. Once again Don and Marge volunteered to start the race with a start line heavily biased to the shore end. 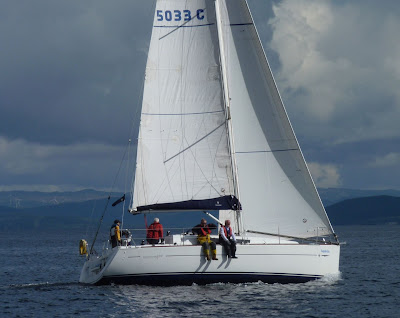 Aquaholic and Troikka soon pulled out in front and the breeze persisted right to Ardlamont in perfect sailing conditions. 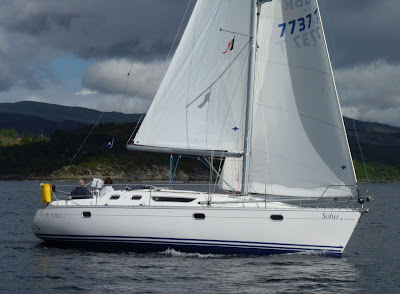 We can't see the helmslady in this picture of Solus but we hope it's not the person with the wee bald patch!
Once round Ardlamont the progress downwind without spinnaker was a little slower but there can be no doubt that the ladies had a superb day for their race. Here is the winning lady concentrating furiously. 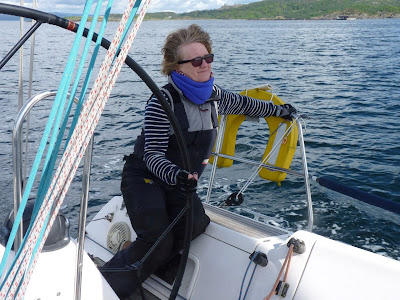 Posted by Serpent Yacht Club at 21:36