Forecasts of winds gusting F8 caused anxiety amongst many of those looking forward to the Tarbert Race at the end of the week.  Even the race officer was having second thoughts and by the Thursday, amidst considerable doubt he cancelled the race.  Only Camus Bosta, Tulla Mhor and Shona declared an intention to sail to Tarbert, the remainder of the 40 or so who had signed up opting for wheels.  Unfortunately overnight accommodation in Tarbert proved hard to find and so the declared numbers were somewhat depleted. At the 10am Saturday start time the rain was battering the windows of those not at their boats and not going sailing was looking like a desirable prospect. However Camus Bosta set out from Largs while Dugald and Val Glen in Tulla Mhor considered their options.  Martyn Webster was undeterred by the conditions and set out in Shona, which must be an endorsement of the seaworthiness of the Scottish Island class.  Regrettably, some time later he decided that conditions were just too severe and turned back. Only Camus Bosta made it to Tarbert, with some damage to their jib and having experienced what they thought were F8-9 squalls at times in between more pleasant sailing conditions. 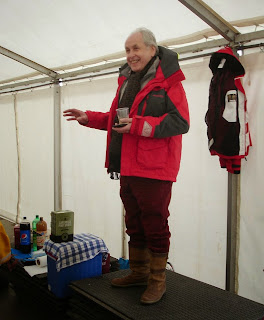 As the Tarbert gazebo would have blown away we were able to make use of the marquee erected for the Scottish Series the following weekend. Around 22 Serpents and friends gathered for the drinks party with conspicuously tasty nibbles supplied by Don and Marje.  In the absence of the Commodore, Stewart Toy took to the soapbox for the welcome address. Thereafter all repaired to the Starfish restaurant who had been remarkably accommodating in the face of ever fluctuating numbers and enjoyed a session not notably diminished by the lack of sailing opportunities . 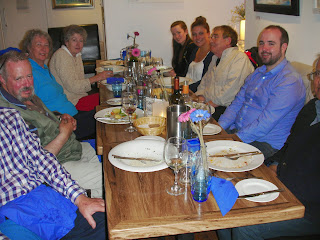 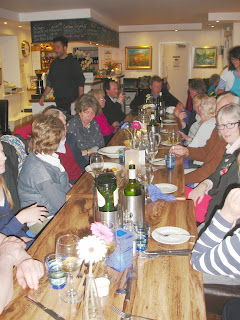 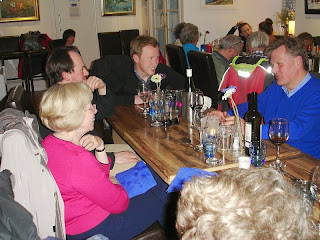 It remains to be decided when the Ladies Race, that unmissable fixture in the Serpent calendar, is to take place.
Posted by Serpent Yacht Club at 10:08 0 comments