Five boats turned up for the race from Rothesay to Portavadie. Aquaholic kindly acted as start boat and as such started off five minutes after everybody else. 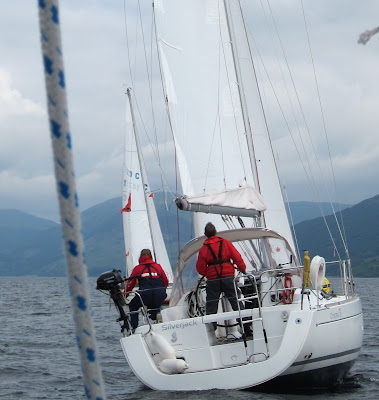 This meant that the race up the East Kyle was a very friendly race with everybody vying for position However it was a bit of a lottery with first one side then the other looking favourable, however the boats who sailed mid channel in the East Kyle faired best. 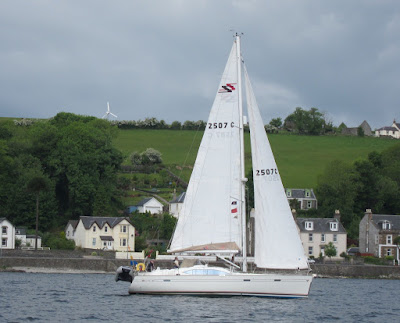 As the winds were very light, Out Of the Blue drifted with the tide onto the Ardyne Buoy, requiring a penalty 360 turn. Camus Bosta also struggled with lack of wind and tide at this buoy and they retired. As Aquaholic disappeared into the distance, Black Pepper and Silver Jack crept on ahead of Out of the Blue. However holding to mid channel Stewart caught up with the help of tide and a little wind, as BP and SJ both got becalmed inshore. 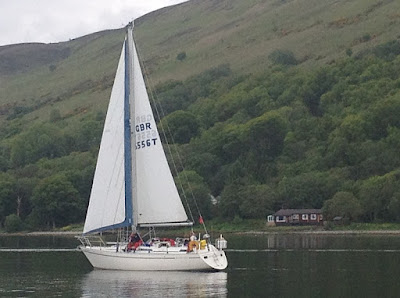 A misunderstanding of a radio message from Tom resulted in OOTB thinking that the race had been shortened to the Rubha Bhodach, the Green Buoy at  Colintraive and transmitting the message to those behind who did not have the race channel on their radios. It was therefore with some surprise that as Black Pepper and OOTB were rafted up in Wreck Bay having lunch, they heard race officer Tom radioing  in that the race would finish at Tignabruach. Oops.
However honour was restored when Tom split the race into two classes. Class one which ended at Tighnabruach and class two which ended at Colintraive.


Results are as follows: 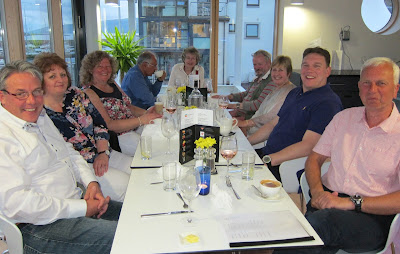 18 people joined the Aquaholic crew for a delicious spread of drinks and nibbles followed by a lovely meal in the marina restaurant. Many thanks to Tom and Caroline and their helpful neighbours for preparing such a delicious spread. After the meal Stewart gave his famous lecture on how to balance a wine bottle on the edge of a table. 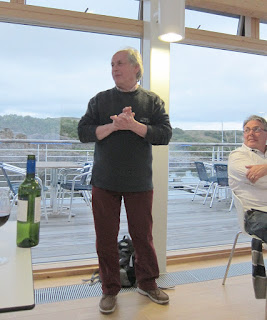