Autumn Muster - No rewards for the quitters

All of the preceding week it hadn't looked very good for sailing on Saturday 8th September and when the day finally arrived the predictions were confirmed. With a poor entry of only four boats racing it hardly seemed worth the bother but there was just enough of a zephyr off Kip to allow Stewart Toy on Katya to select a shortened course start, missing out the first mark.  Both Aquaholic and Troikka can manage in these conditions and both made a clean getaway towards Dunoon Bank but Camus Bosta struggled to clear Kip and Katya, 10 minutes later were hardly up to speed either.  Troikka reached Mark One first, dodging the patches of still air but finally became completely becalmed somewhere not far east of Cloch and began drifting backwards in the tide.  With mist coming down there seemed little prospect of any improvement and there was a unanimous vote on board for retiring.  The photo below shows the scene in the Holy Loch where the Polaris regatta was running with little action for the Piper classic dayboat class. 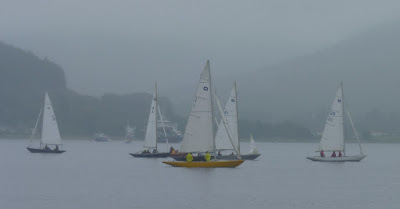 Katya, further back needed little encouragement to follow suit but Tom and Neil are made of sterner stuff and stuck it out for several hours while the other two were safely tied up in Holy Loch marina where eventually it became apparent that the sun was coming out and a sailing breeze was developing.  Black Pepper, Sulaire and Solus cruised in and all the pontoon socialising began in earnest but it was late in the afternoon before Aquaholic and Camus Bosta finally arrived having finished the course within the time limit and of course placing a very commendable first in Classes 2 & 3 respectively. 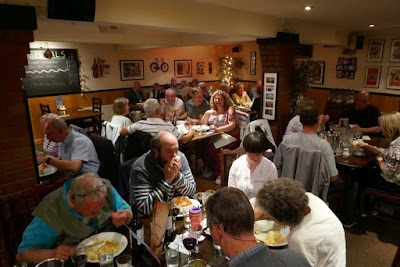 A convivial evening followed in the Cantina restaurant in Dunoon despite the rather disappointing food quality and there were some late nights on board back at the marina. Next morning completed  the traditional feast or famine scenario for the Polaris weekend with SW wind building to the high 20s giving quite a boisterous sail home.  Maybe pick a different weekend next year.