Next event is the Frostbite Race to be held on Saturday 2nd October.  The course, weather permitting will be the familiar figure 8 around the Cumbraes and starting off Largs Marina at 11am.  Climate change makes the likelihood of actual frostbite highly unlikely so pack your shorts. 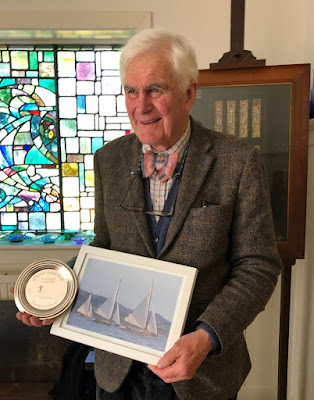 On behalf of the club, Graham and Don Gillies were delighted to visit Martyn Webster and his wife Shery at their home to present him with the 2020 Commodore’s Trophy. This award was given in recognition of Martyn’s long and active association with the club and his participation in Serpent events and races right up to his recent decision to retire from sailing. Until last year he regularly raced his Scottish Islands yacht Shona at our Musters; both on the Clyde and the West Coast.
Martyn was delighted to receive the award and asked us to pass on his sincere thanks to the club. His beloved Islander yacht Shona is currently for sale but he is continuing his maritime interests as part of a group building a St Ayles Skiff which was launched on Loch Fyne this summer.
Martyn is seen with the award and holding a favourite photo of Shona racing against Bernera and Stroma. 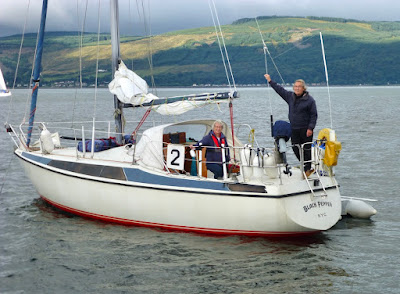 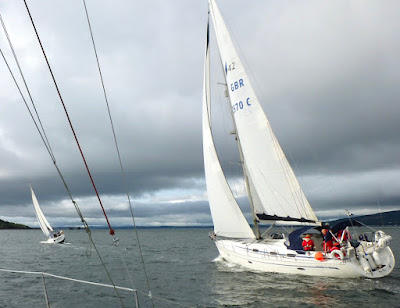 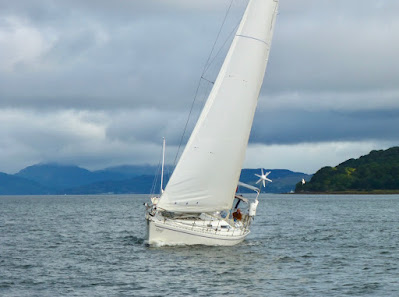 It can never be assumed that a number of Serpent members will be in wholehearted agreement on any given subject but in regard to the much delayed and long awaited Opening Muster weekend that was indeed the case.  There was joy abundant falling just this side of ecstasy to be out sailing once again and meeting up convivially in circumstances not very different from what used to be considered normal.

Only 5 boats were entered for the race from Rothesay with Don and Marge in Black Pepper forming the welcoming party at Tarbert.  This was to be the first time for as long as I can recall when all entries were two handed.  The forecast for the weekend was mixed but there was a very light breeze available in Rothesay Bay enabling Graham on Silverjack to get the start underway. 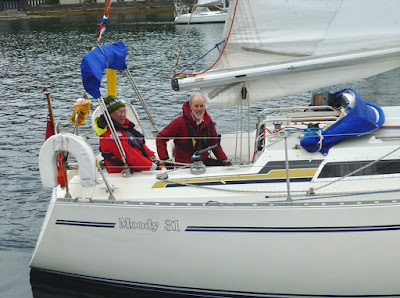 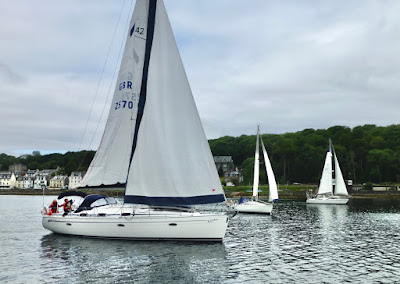 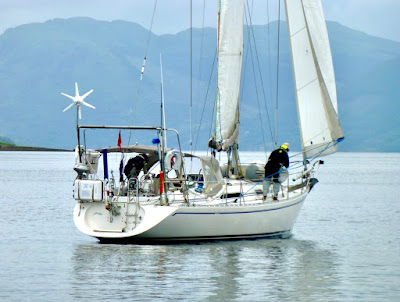 All but Katya who headed off into what was to prove to be an unassailable lead were struggling to make much of a start but eventually all rounded Ardyne and into the inevitable beat up the East Kyle.  This was the first time that Anne and Charles had been out together on their 'new' (32 year old) First 29 Lollypop  and to begin with were in close contention with Emma Louise but gradually pulled ahead.  Exody was not far behind and after the 10 minute start boat delay Silverjack began to catch up.  The wind had built to a healthy sailing breeze and by the time we had tacked our way through the Burnt Isles everyone was beginning to find all this tacking not a little tedious not least Exody whose mainsheet block exploded - it had after all been round the world.  There was some respite for the fatigued winch monkeys by the time we had finally cleared Kames but by this time Katya, (with the assistance of their 3rd mute crew member) was fully powered up on a reach and disappearing down the west Kyle on what is otherwise known as a horizon job.   Somehow, not least with the energy Anne was putting into the winches, Lollypop managed to pull out some distance on the rest of the pack and held this all the way to a most welcome arrival in Tarbert where with Don and Marge's directions we all tied up in 2 lines along the main east walkway.

Eventually, the race was followed, once the race results had been announced on the pontoon, by the evening meal in the Starfish where, with 1 metre distancing and table household rules in place we had the additional joy of being able to dine from the a la carte menu as well as being pleased to be joined by John Turner & Winnie.  After the meal there was an invitation for a socially distanced dram in Katya's cockpit where ultimately the present writer struggled to stay awake.

Addendum. At the time of writing the Club is pleased to announce that no Covid infections appear to have resulted from the weekend activities.

Sunday dawned sunny with the prospect of a reasonable wind for a reachy course to Ardlamont to form the most basic 'Ladies' Race' this course having been chosen so that Marian could participate before Exody continued southwards.  However with a change of plan on Exody it was left to Catherine and Anne to fight it out.  After a graciously allowed 5 minute delay while a struggle with mainsail sliders proceeded on board Lollypop, Graham started the race as both boats sought to make progress between the catspaws. 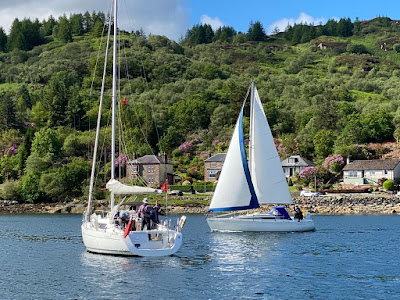 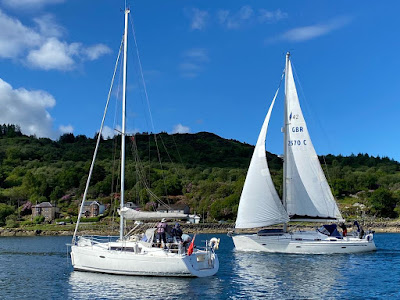 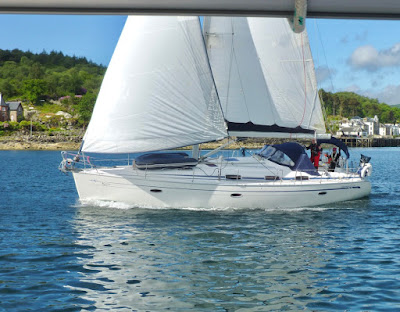 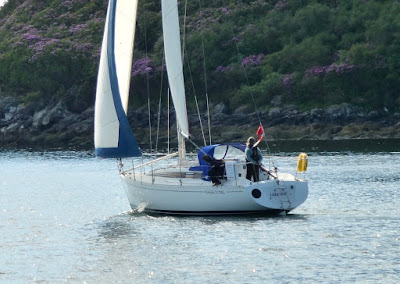 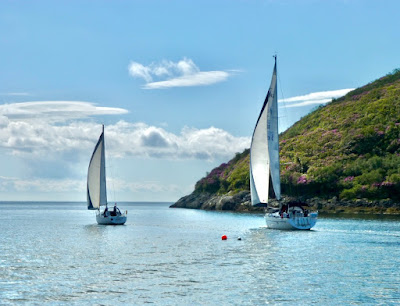 With Lollypop ahead to begin with Katya found a good sailing breeze first and reached away in the same manner as on the previous day. 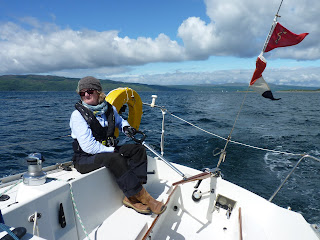 There was no possibility of Lollypop catching up and Anne was further handicapped by a large wind hole having formed around the Ardlamont buoy adding a further 10 minutes or so of drifting time.   There was no doubt that Catherine would be taking home the coveted rosebowl along with Saturday's line honours and first in Class 2 pots. 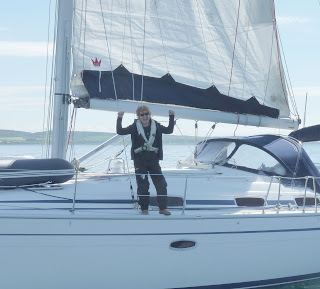