Eight yachts gathered on the start line off Kip for the SYC opening event of 2013. The breeze was desperately light but with a forecast of heavy northwesterlies later in the day the decision was made to go for the shorter course through the Kyles.  Aquaholic and Troikka found a little band of breeze near the pin and scooted off on the button while the rest meandered about failing to find any drive and were eventually shoved back by the tide. After about 20 mins sailing this was the view from behind. We could imagine the frustration of those stuck on the start line but it was faintly amusing. 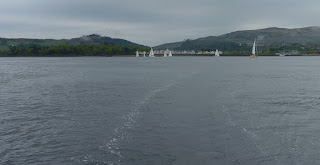 Troikka with just 2 on board and Aquaholic with a full team continued to make fairly good progress towards Toward at which point the breeze died and even Aquaholic's spinnaker failed to offer much advantage. 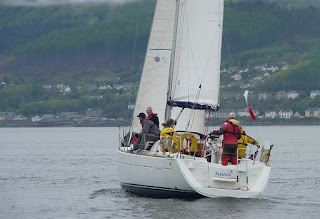 An appeal for mercy from Troikka resulted in the race being shortened at the Ardmaleish buoy - a good decision by the Commodore/Race Officer on Out of the Blue as otherwise the slower boats would hardly have made it to Tarbert in time for dinner.  Aquaholic finished first and Troikka drifted over the line with the tide a few minutes later. Eventually, after a bit of motoring, the forecast wind did fill in and the fleet enjoyed a brisk beat up Loch Fyne. There was limited time for socialising on the pontoon but all convened in the Starfish restaurant for a convivial dinner at which time the results were read out. 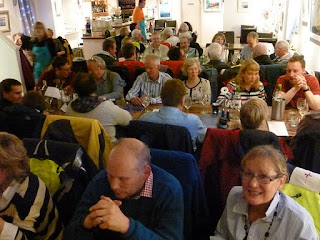 One of the remarkable features of the Serpent Yacht Club is the abundance of trophies - it means you have to sail really quite badly to avoid being saddled with tinware. Alas only the retirees have escaped pot-free.

The Ladies Race is perhaps the most fiercely contested event of the Serpent race programme and an intense bidding war breaks out during the dinner as all-male crews attempt to lure a Lady from some boat in which there is a surfeit of females. This was concluded successfully with the result that 8 yachts, helmed by ladies, appeared on the start line on Sunday morning for the white sails-only race to Kames with Martin Yule in Pondskater kindly agreeing to do committee boat duty.  With around 10 kts of breeze filling in from the south this was perhaps the most  intense start to a Serpent race for some time.  Once again Troikka and Aquaholic headed off the line into clear air but not before Marcus Stone as tactician on Emma Louise had Margaret Hamilton execute a nifty port approach and a daring tack close under Troikka's bow.  Alas once more the breeze failed, exactly as forecast, and those up in front were soon caught up by the back markers.  Being carried on the tide rather too close to the Ardlamont shore, Troikka, with the reluctant agreement of the skipper, retired and a few minutes later sufficient zephyr appeared to allow the rest to creep over to the finish line set off the Ardlamont buoy.  Aquaholic's lead was then to no avail under handicap and first place was taken by Ailsa Tyler on Spirit, the Sadler 32 of new member Crispin Best.  Results below. A good weekend all in and the hope is for a bit more wind for the Portavadie weekend on 15/16th June.