The new website
One of the aims of setting up the new Serpent Yacht Club website as a blog was to increase the possibility of interactivity. At present, the committee members are the only people who have the passwords to log in and post an actual article or place photos but at the end of every posting there is a line which says "Posted by Serpent Yacht Club at xx.yy time. 0 Comments ".
If you click on the '0 Comments' it opens a dialog box where you can place your own comments be they interesting, grateful, witty or just plain scurrilous.  Serpent members are thus encourged to use this facility. Unfortunately you cannot add photos via the comments box but we may try to start an open photo repository elsewhere.
Posted by Serpent Yacht Club at 09:41 2 comments 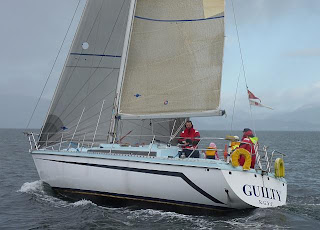 For a change this year’s Autumn Muster headed South to Rothesay. The acting Race Officer unwisely set a shortened course which missed out the passage through the Tan and resulted merely in a fetch to Hun 1, Toward and thence to Rothesay.
Such was the enthusiasm at the start that there were two recalls. Kelpie :D was first over the start line having miscounted the guns but heard the recall announcement and restarted. On the other hand, Stewart Toy on Out of the Blue, powering up to the line in great style and distracted by his all female crew, mistook Anne Sutherland waving at him as an instruction to cross the line (N.B. 2 excuses there!) and was completely over when the horn sounded. Unfortunately, and presumably due to the aforementioned distraction, Out of the Blue paid no heed to the recall signals and remained OCS. 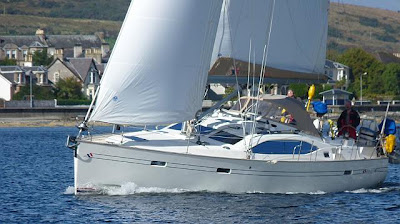 Sailing through a breezy but drizzly force four which was followed by light and bright threes, the fleet reached Rothesay far too early in what had become a fine sailing afternoon.
Later, Que Chica, Emma Louise and Exody cruised over to join the racing fleet.
A pleasant few hours were spent socialising and viewing new boats in and around the new harbour- Neil McDougal’s Camus Bosta, Peter Jennet’s Exody and Tom Hutchinson’s fast-looking Aquaholic. Drinks parties developed on Camus Bosta and Troikka and many thanks to Neil and Marie and Charles and Anne for hosting these. 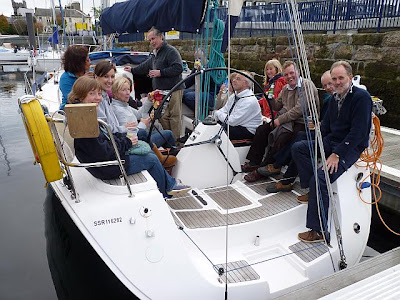 At six thirty, a bus transported us all to the very stylish Mount Stuart Visitor Centre where we enjoyed a beautiful dinner of locally produced food: lamb, halibut, langoustine and Isle of Bute cheeses and many thanks go to Mount Stuart catering staff for providing such a fine dinner. At the dinner the results were announced. The Acting Race Officer appears to have mislaid the timesheet (or left it on his boat) but the result order was: 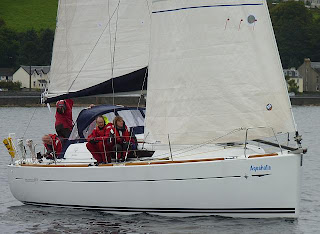 Class 3
Sunday dawned misty and damp. Only Kelpie D, Tulla , Guilty and Aquaholic braved the morning haar and absence of wind to struggle back to Kip. With her early start, Kelpie:D was first to catch the wind and took line honours, closely followed by Tulla, Guilty and Aquaholic. 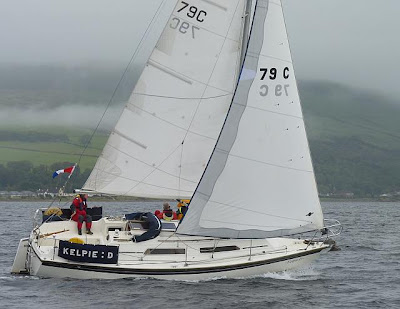 This year’s Autumn Muster is from Kip to Rothesay with a pursuit race back to Kip on the Sunday. We have organised a special three course Dinner at the stunning Mount Stuart Visitor Centre. The cost will be £30.00 which includes the cost of the meal, plus the cost of the bus there and back. The bus will leave from Rothesay Pier at 7.00 p.m Completed entry forms to be returned to Catherine Toy by the 12th September, to help identify numbers for catering and for the bus. If you require a children’s menu can you specify that on the form and we will organise it with Mount Stuart.

This will take place from Largs and will be a race round Greater Cumbrae. This year’s socialising will be left up to the participants on the day. Race instructions are enclosed with this newsletter.

The venue is the Glasgow Art Club in Bath Street and the guest speaker will be Paul Dodson, a friend of Tom Barrie’s. He is both a sailor and a medic. More details will appear in the November Newsletter.
Could all members who won cups last year please return them to Iain Sinclair or any Committee Member no later than Mon 1st November.

After the stunning weather in May and June, which was often accompanied by fair winds, it was all the more disappointing to experience yet another dismal July and August. There seems to be some malign presence which causes the weather on the west of Scotland to break as soon as the schools stop, and often only to pick up again as soon as the autumn term commences.

Whilst we have to live with whatever the local weather throws at us, we can at least try to devise as attractive as possible Musters. You will see in this newsletter, the venue for the Autumn Muster has changed to Rothesay. Whilst keeping a similar sailing format which has worked well in the past, we have organised a rather special dinner at Mount Stuart House restaurant, together with transport from Rothesay. Having seen the menus and the wine list, this should be a memorable evening for the club.

The Cal Mac ferry timetable may prevent those who usually drive to this muster from returning to the mainland after the meal. However, there is a wide range of accommodation on Bute, and particularly if anyone has not already visited Mount Stuart House, I can strongly recommend that they combine a visit with the muster, since both the house and the gardens are quite outstanding.

I look forward to seeing as many of you as possible in Bute in September.

Please remember the club has a log Competition. For those of you who travelled far or even not so far this summer, entries should be forwarded to Catherine Toy, by the 31st October.
There will also be a prize at the dinner for the best photograph of a Serpent Boat. Again entries to Catherine by 31st October.

The club congratulates
· Roisin and Paul Harris on the arrival of their twins Arthur and Bridget.
· Kirsten Clow on her marriage to Julian Finnigan.
· Tom Hutchison and Peter Jennett on their new boats. Tom’s is a Sun Odyssey 33iP to be called Aquaholic. Peter’s is a Sadler Starlight 39.