If anyone noted down dates on the Calendar page on this site between the evening of 2/3/15 and 3pm on 3/3/15 please amend them. The correct dates of the Croabh Muster and the September Rothesay race have now been uploaded.

As most Club Members will be aware, Peter and Marian Jennett have been proceeding on their circumnavigation since summer 2014. 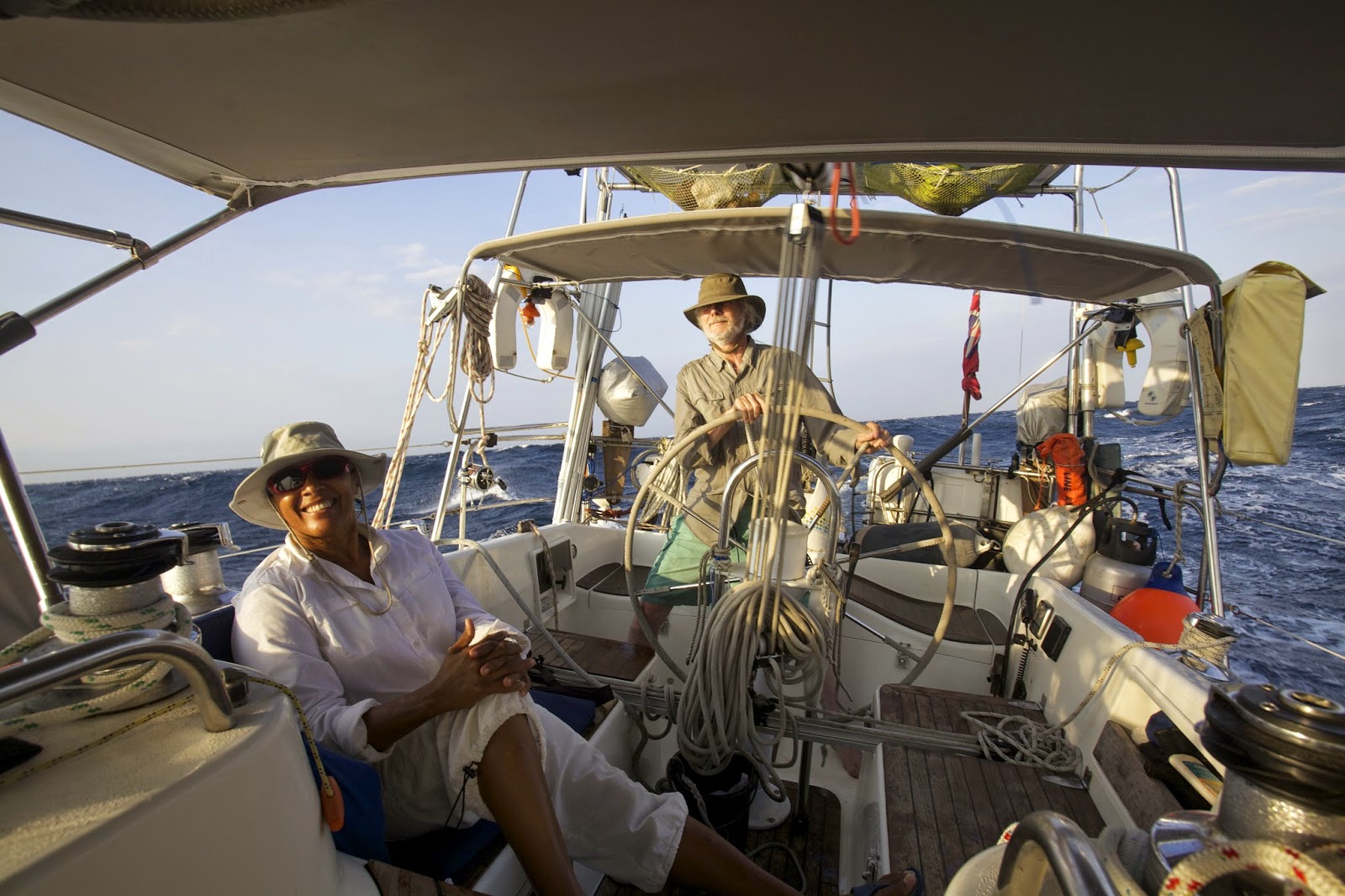 Exody is a Starlight 39 which has been well sorted out for the trip. They have a fulsome blog linked There are certainly some photos which represent something of a contrast with Tarbert on a wet afternoon. 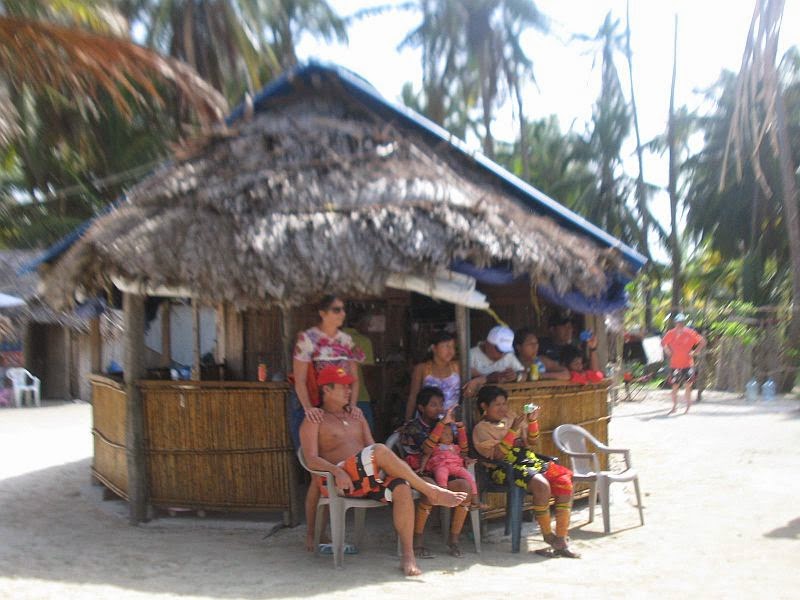 Exody at time of writing (2nd March) is now in the Galapagos Islands. The following is copied from the World Cruising Club website.  Go here for the full story and to be amazed.

Skipper Peter writes:
Swimming with sharks, turtles and eagle rays is a memorable way to spend my birthday on Friday 20th! Opting for the extra hour long visit to nearby Loberia beach we were up early for the water taxi at 06.30. Fernando the guide helped us learn about marine iguanas in and took us for a brief snorkel then it was back to town to join the main trip to Kicker rock- just 12 of us plus baby Kai with Juno and Makena. A high speed 40 minute ride later we were circumnavigating the massive volcanic outcrop and we were soon in the water - like swimming in an aquarium - strange to feel comfortable and safe looking down on 25/30 sharks including two hammerheads, a multitude of other fish, a couple of turtles and closest to us an orderly procession of eagle rays- white spotted. We swam through the narrow 20 metre channel between the main outcrop and its sister - carried gently by the current and with baby Kai towed along on a life-ring. There were some dramatic water temperature changes and it was almost feeling cold (all things are relative!) by the time we reboarded the boat. A short hop to a deserted mainland beach tucked behind a reef for a lunchstop and walk - complete with sea lions, iguanas, and brightly coloured crabs - a magical excursion!
Posted by Serpent Yacht Club at 22:38 0 comments

A Message from the Commodore

Now that the festive period (and New Year resolutions!) have receded in our minds I decided that it was time to get down to the Marina and start on the long list of tasks to be completed in the coming months. It was freezing, howling a gale and hailstones were bouncing off the deck. Discretion being the better part of valour, I decided retreat was the best option. Hopefully, the weather will start to improve and progress will be made! 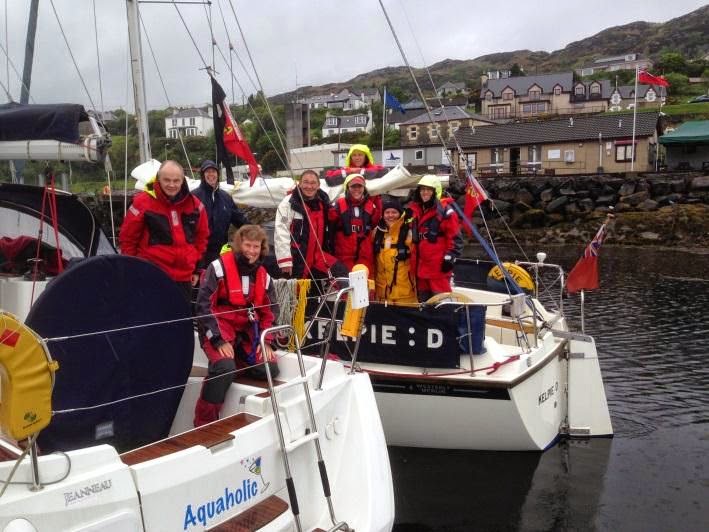 The Club’s annual dinner in November was a huge success with over 40 attending. The November date, and the location in the Central Hotel, were very popular. Jim Pollock entertained us with tales of his circumnavigation and ‘pots’ were duly awarded with the prestigious Scherling Salver ‘Overall Trophy’ being awarded to Don Gilles in ‘Black Pepper’ for the best corrected time for the season. The winning photo based on the ‘Serpent Fellowship’ theme is reproduced below. The evening raffle also raised a superb £135 for the RNLI and £135 for Chest, Heart and Stroke, Scotland.
Our next event is the Club’s AGM which this year will take place in the Board Room at Hamilton Ice Rink on Friday 13 February 2015 at 1930hrs. Martin Yuill has arranged the venue and will give travel details in his Curling Bonspiel report below. Roisin will be standing down at the AGM after 3 years sterling service as Secretary. We are all very appreciative of her contribution to the running of the Club and wish her every success in her new ventures. If anyone is interested in this or any other position on the Committee please contact either Roisin or myself as we will be pleased to welcome new Committee members to help run the Club.

I would also like to welcome our latest Members, Dr Stephen Dahill and Dr Evonne Curran. The Committee is delighted to see the Club’s membership growing.
The latest news from Peter and Marian’s circumnavigation is that they arrived in Colombia on 15 January 2015 after an 815 miles voyage during which a spinnaker pole was broken! Peter has asked me to say that crewing positions are available on board for the trip from Vanuatu and onward to Cape Town. If any Members are interested, all contact details are on the web link http://exody.wordpress.com/
I wish everyone good luck with preparations for the new season and encourage everyone to participate in the club activities being developed by your Committee on your behalf. As always, if you have any questions or comments about the club, please do not hesitate to contact a member of the Committee or myself.
Séamus Lalor - Commodore

Sunday 25 January saw the resurrected SYC Curling Bonspiel between yacht crews take place at Hamilton Ice rink. The following yachts were represented by the time the starting bell was sounded. Camus Bosta, Troikka, Out of the Blue, Pondskater, Emma Louise, Ataraxia and Tigerfire. 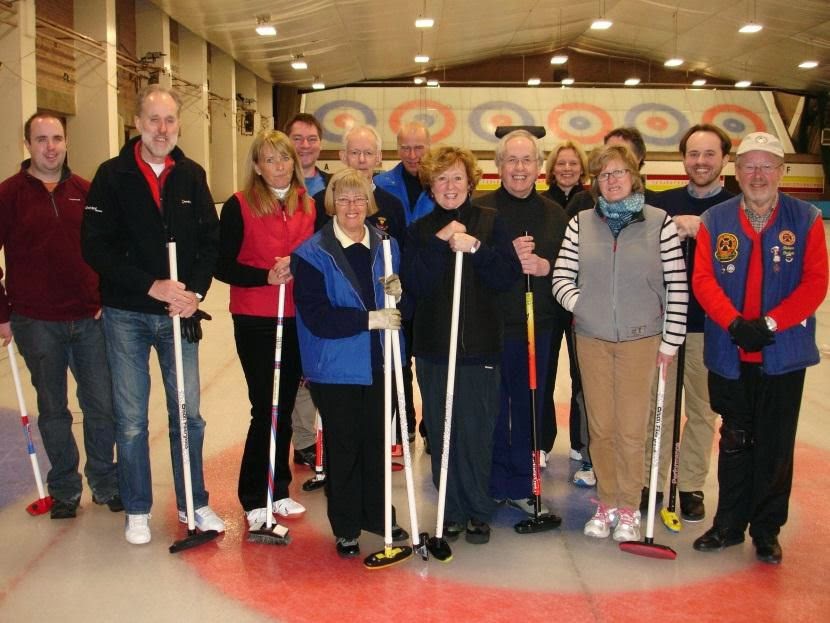 A good representation of the Club. The photo above shows the whole group minus Dorothy Jackson who took the photo.The comment from the viewing gallery was that some were very hesitant on the ice to start. Understandable as there were three total beginners (now classified as experienced l curlers!!) and some who said they had curled before but were not much better than beginners. The gallery noticed a marked learning curve and by the end there was a much greater fluidity and grace to the movements on the ice. Better sweeping, more aggression and a desire to win. No comments will be passed on the standard of the curling. My thanks to the experienced curlers for helping all the beginners.

The organiser was delighted that there was no blood on the ice, and you seemed to enjoy yourselves. So I am happy to book ice for next year if you want it. You do not need to be an SYC member to take part only to crew on a Club boat. Members please pass this information to your crews. The winning Rink was. Bill Jackson Skip, Celia Corbett 3rd, Jane Hinshelwood 2nd, and Charles Sutherland lead, with a score of +3 shots.
There were no protests so the good offices of Bobby Corbett as umpire were not needed.
- Relieved OOD Martin.