As had been previously decided, Serpent yachts gathered for the start off Rothesay on the morning of Saturday 17th May. In view of the weather forecast, race officer Charles Sutherland opted for the course through the Kyles in order to spare the fleet an arduous beat to Garroch Head.  It was to be a running start towards the Ardyne buoy and the six starters, (to be joined by the committee boat 10 minutes later) crossed the starting line in a reasonably orderly fashion. 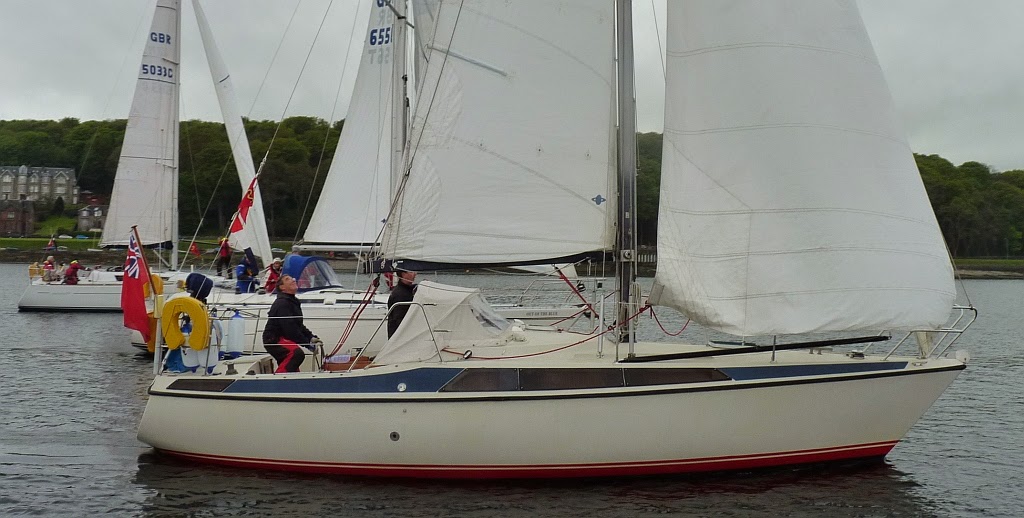 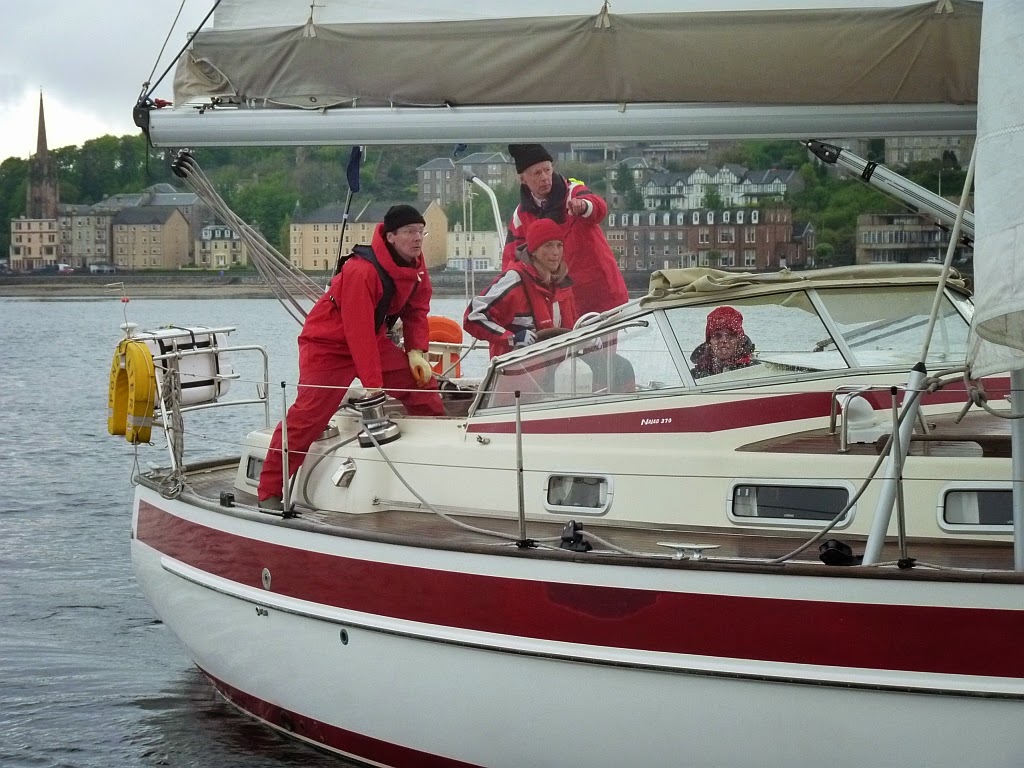 Martin Yuill on Pondskater issues instructions to his crew 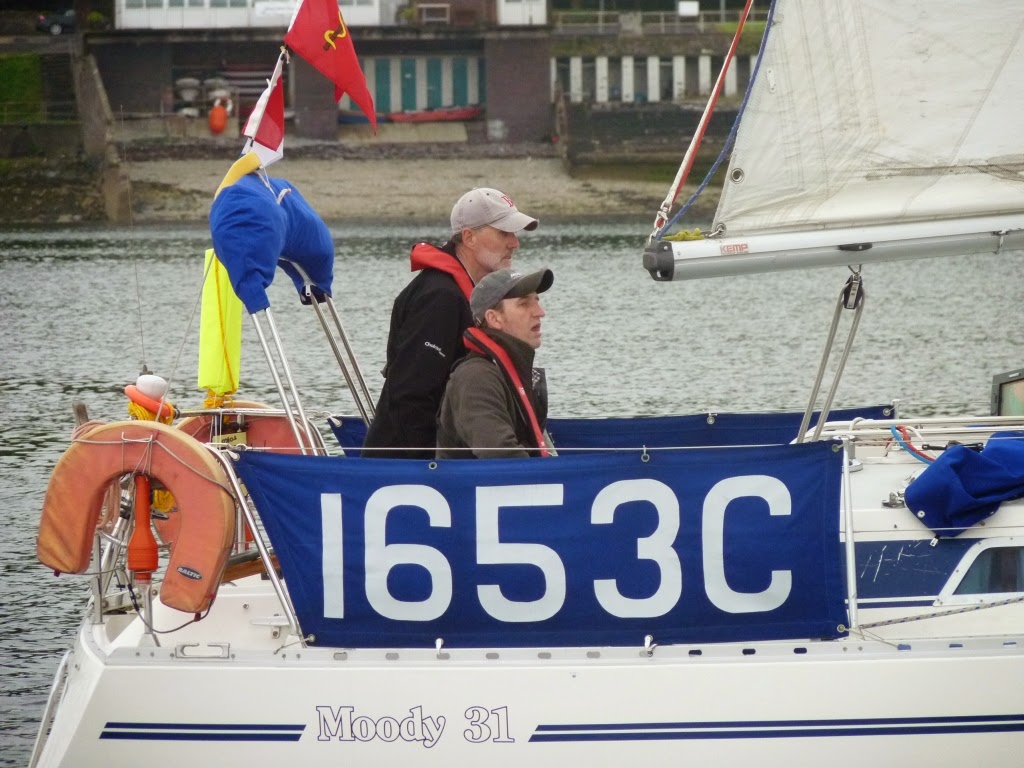 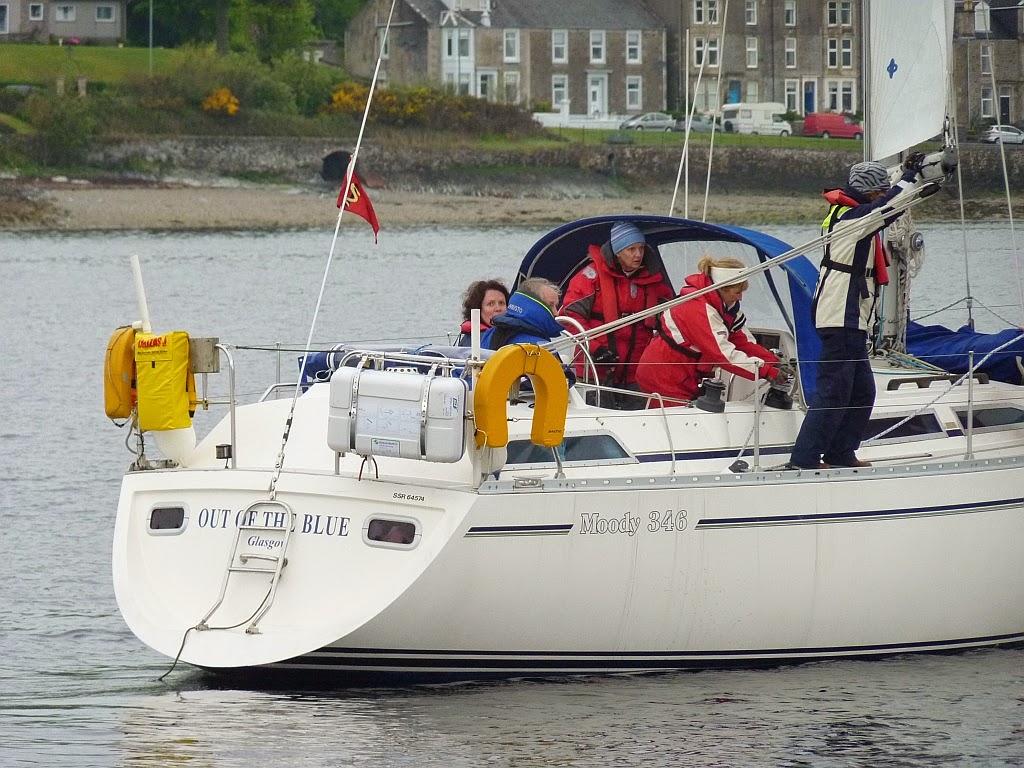 The female crew of OOTB get into action
As the fleet, in the very light breeze, slowly drew closer to the first mark, the separation between boats decreased  leading to an interesting mark rounding. 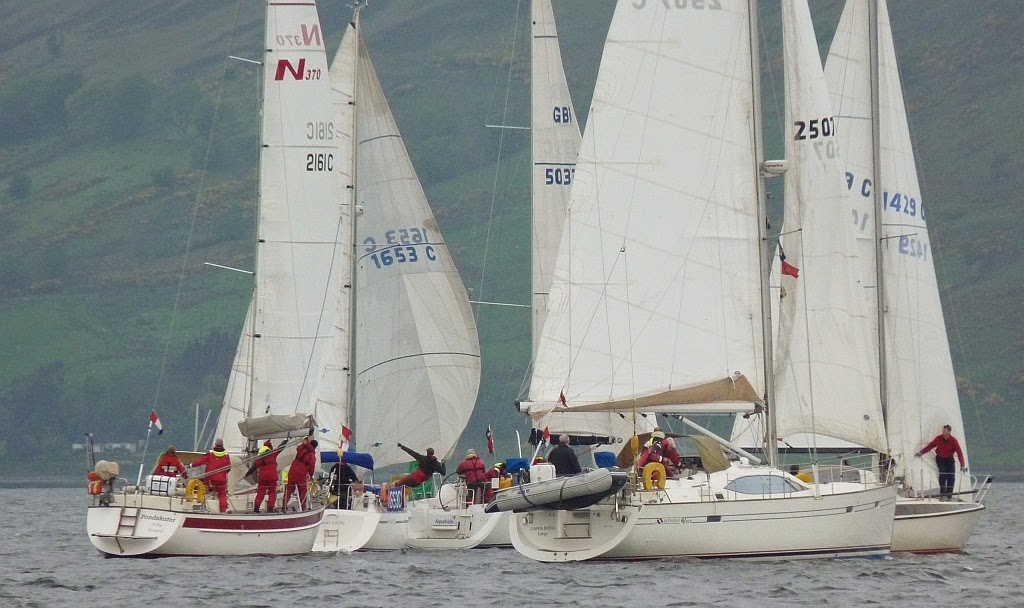 We're not sure what the human spinnaker pole on Emma Louise is attempting to do here (illegally) but there is clearly very little space between Emma, the mark and Aquaholic. It is impossible to judge from this viewpoint whether or not Seamus has an inside overlap but from his account he called for room, did not receive sufficient and had his boom touch the mark.  This resulted in the almost unprecedented ( in recent years at least) call of Protest which, in the best spirit of the club, Tom accepted and duly performed his turns shortly thereafter. We heard later that those on Out of the Blue were concerned that Aquaholic had rudder failure but presumably they were just winding up their novice crew. 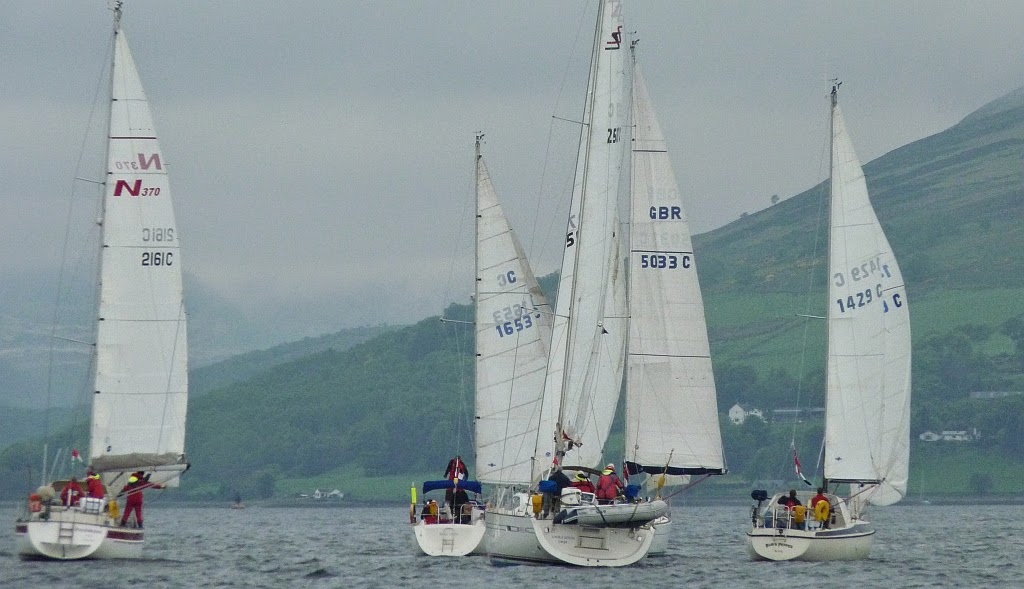 Emma Louise and Aquaholic went on to lead the fleet up the East Kyle until they were overtaken by Troikka. Further back there was some spirited luffing by Pondskater, determined to repel anyone attempting to pass to windward. At the Burnt Isles the rain and wind appeared giving us all a good one sided beat down the West Kyle into ever freshening wind off Ardlamont at which point Kelpie D was spotted making her way from Loch Riddon.  The race finished with a fast broad reach to Tarbert during which Aquaholic claimed to be reaching 9-10knots in the 30kt gusts. Troikka, disappointingly, did not exceed 9kts but then she only had her small delivery jib and the helmsman was in no position to take any more photographs even if the rest of the fleet had been visible.
All in all it was a good day's sailing in a mix of conditions and lacking only a bit of sunshine. This was the first event for some time in which there was no Class 1 spinnaker entry - due to crew shortages. 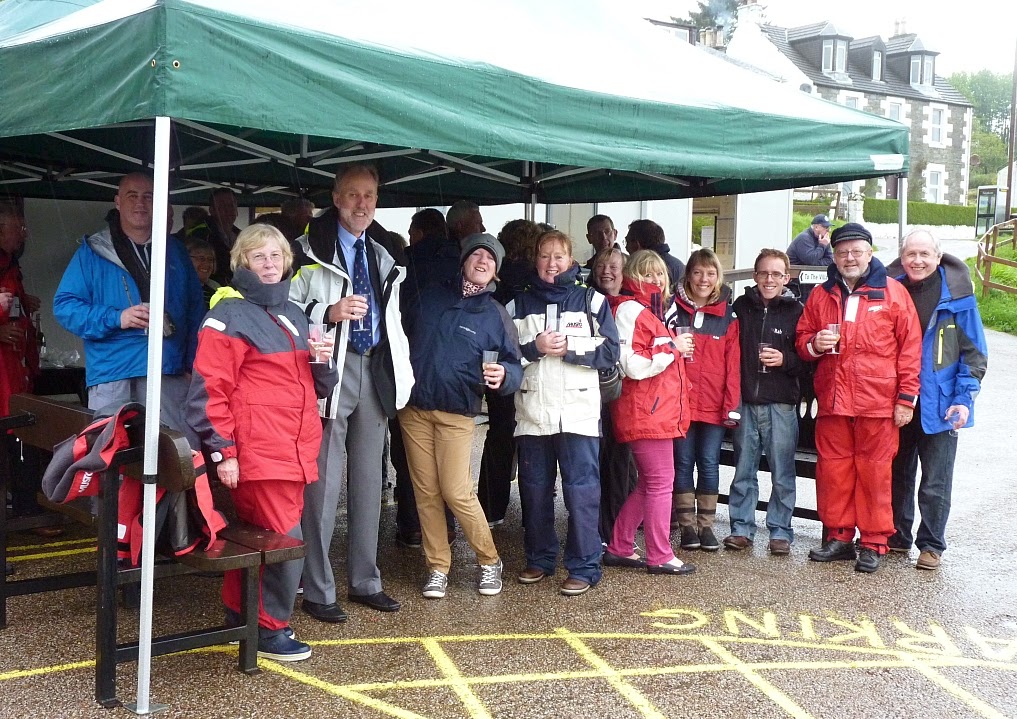 After some on-board whistle-wetting, recovery and general drying-off, the party gathered in the 'Marquee' which, along with a good supply of fizz,  had been arranged by the Commodore in order to promote social interaction. Despite the almost continuous downpour this proved a success and thereafter all 33 or so members and guests proceeded on to the Starfish for the event meal during which the race results were presented and Tom Hutchinson appointed Vice Commodore.

Overnight the rain battered incessantly and continued into the morning by which time, especially in view of the F5/6 southerly forecast, there was little enthusiasm among the Ladies for their race. The cunning suggestion was then mooted and immediately accepted that the Ladies' Race be postponed until the Portavadie Muster on 14/15th June. 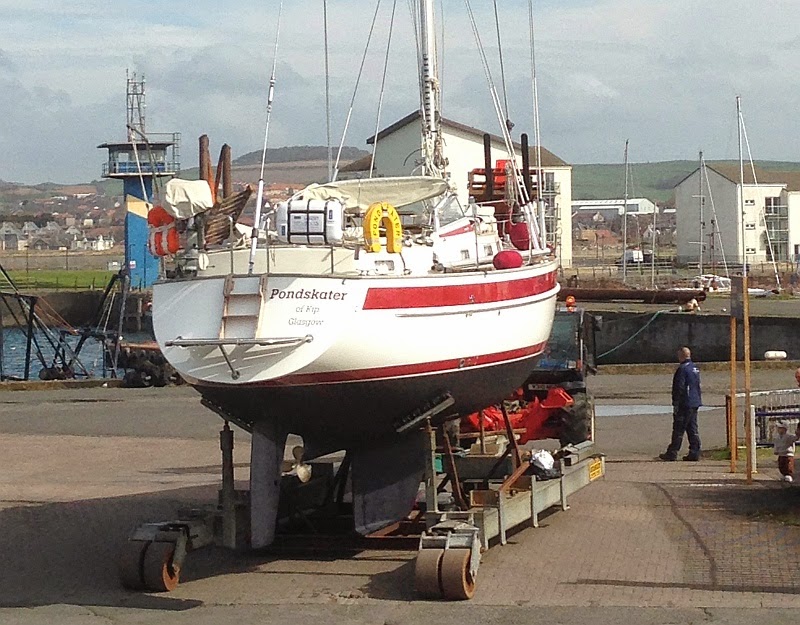 Here's Pondskater ready for the drop at Ardrossan, soon to be followed by Emma Louise. Good to have a sunny day for it. The Commodore reckons that's a good omen for the Spring Muster. Nevertheless this is probably the last time you see Emma Louise without her Wendy house erected. 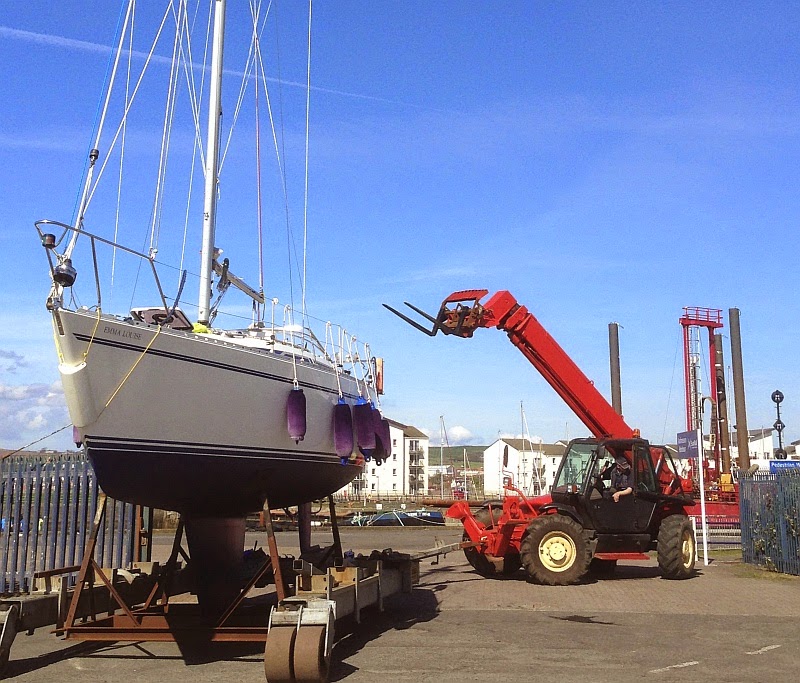 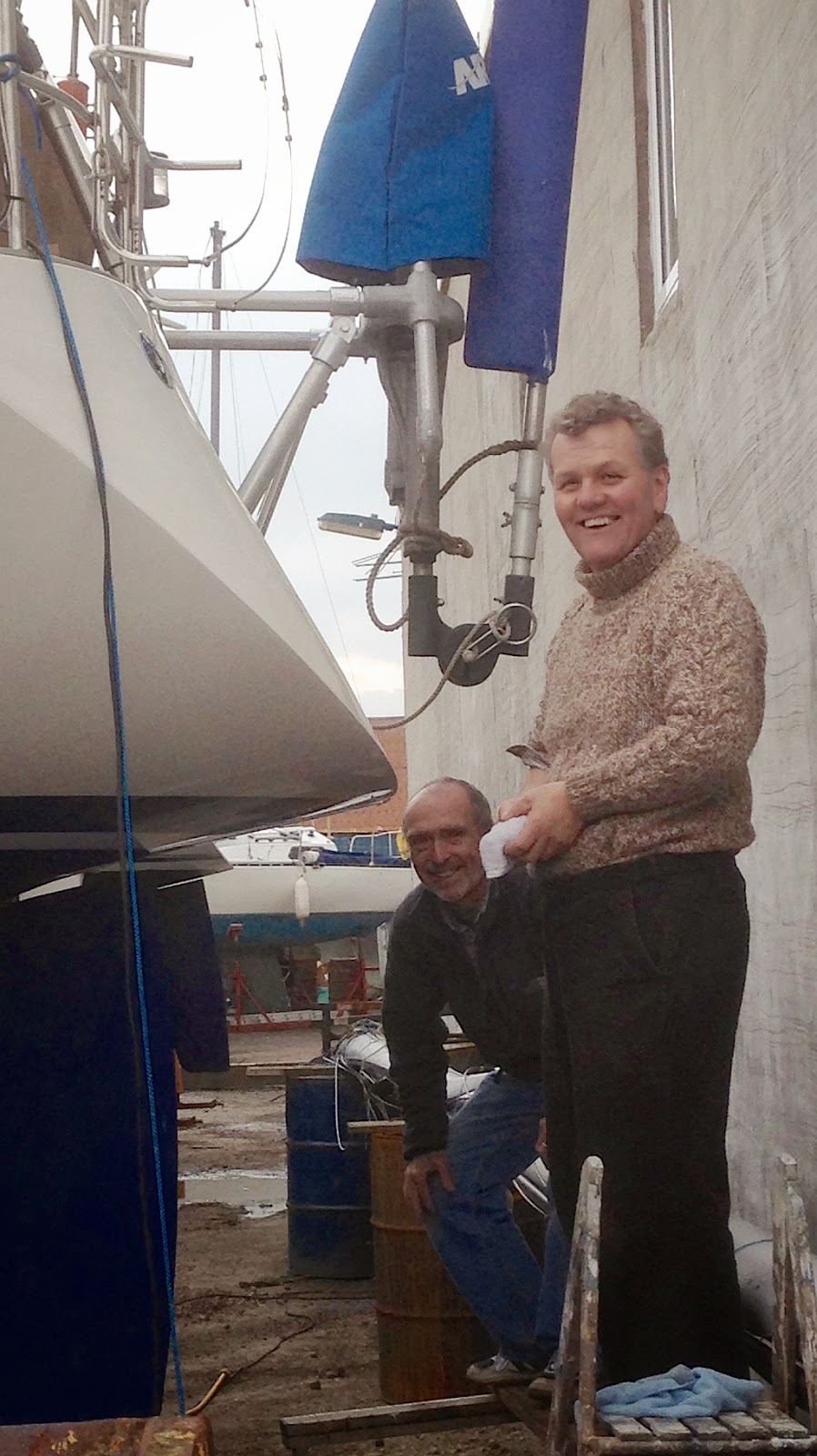 Here's Robert helping to put the finishing touches to Exody as the departure for the Peter and Marian's epic voyage comes nearer. Note the self steering gear - essential for circumnavigators. 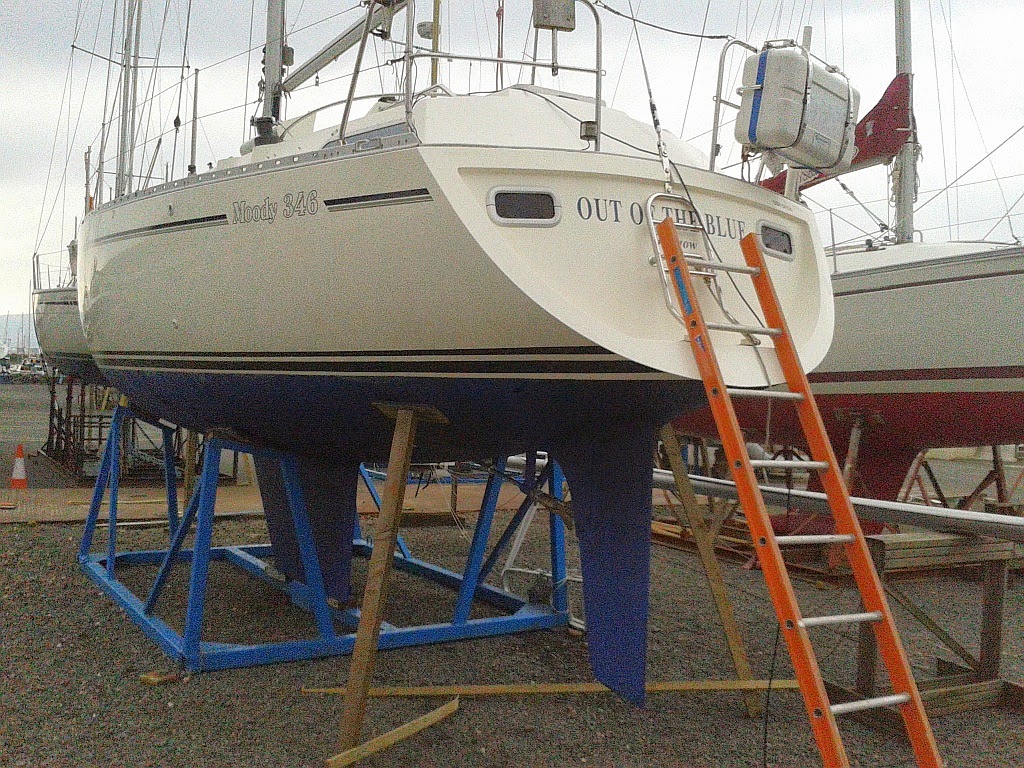 And another transom which Stewart and Catherine no doubt hope we'll be seeing more of this year. Despite the ladder there was nobody at home - only a Kip engineer rummaging in the bowels.