This was always an informal gathering of those in the area at the time and at this year’s event four Club boats attended, Katya, Pondskater, Troikka, and Emma Louise.

The two non Loch  Riddon boats, Troikka and Emma Louise both found available moorings and a prize should go to Seamus on Emma Louise who single handedly  travelled from Ardrossan to the loch for the BBQ.- 5 Hours into a head wind.

We were joined by Freda and Mike on Mickyfin IV, guests of Charles and Anne who hopefully enjoyed the company and will consider joining the Club.

Also on the shore were Martin Lacey and his children, the son of a neighbour from my early married days who has a mooring next to mine in Loch Riddon but normally keeps his boat on the west coast.

The weather was kinder than last year as a small ridge of high weather passed over the UK.  BBQs were lit, some working better than others but no reports of food poisoning have been received.

The marked breeze died as the evening progressed, to allow the midges a late nibble by the time we retired to sample the commodore’s hospitality onboard Katya.

My thanks to Robert and Audrey Yule and Ian MacLeod for the use of their moorings.

Having come straight from five days of having my granddaughters on board my car was full of toys, games and crab fishing gear so thanks to Stewart and Catherine for tidying the beach on Sunday morning, removing all the old spent BBQ’s and placing the all important Citronella candles by my car so that I would not forget them.

An enjoyable, relaxed get together for those able to come. 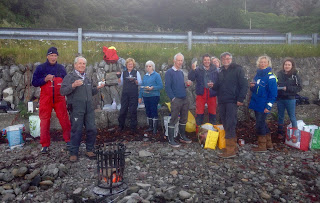 The Happy Campers on the beach 'smoking' well 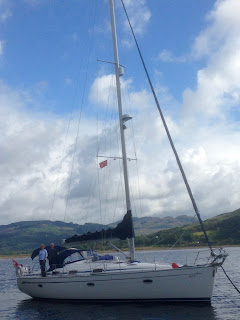 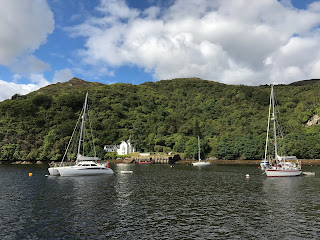 Peaceful Loch Riddon the morning after 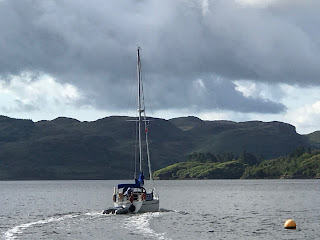 Emma Louise trying to find a route home.
Is it this way or that way??--mmmmm