Here is a short clip of "Troikka" and "Out of the Blue" crossing the finish line, taken by Iain Sinclair on the Committee boat "Black Pepper"
Posted by Serpent Yacht Club at 11:52 0 comments

Reports are not yet in on how the Pursuit Race from Kip to Portavadie went but Seamus and Stewart have provided, respectively, photos and an account of the Ladies Race which was fought with the usual intensity, tenacity and perseverance that we all associate with the Serpent lady members. 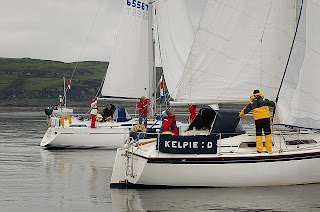 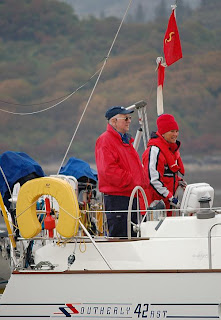 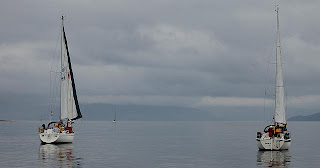 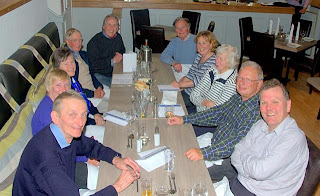 However, although the Muster was cancelled, some hardy Serpent members in Que Chica and Jomora had already reached Tarbert and were joined by Out of the Blue and Kelpie D who travelled there by car. They decided as they were there anyway, they would go along to try out the newly refurbished Anchor Hotel. Under new management, it has been transformed and is looking fabulous. The food is delicious.

Please note that the committee has decided that as the club cancelled the muster and the race, the club will absorb the Anchor Hotel‟s cancellation fee and all dinner payments and race fees will be refunded.

Clyde Get Together Portavadie – Saturday 18/19th June
As we have a number of cups which we normally give out to the winners of the Spring Muster races, we have decided to transfer these cups to the races being run on the Portavadie weekend.
Race instructions for the weekend are attached. These races follow the Spring muster format with the finish of Saturday‟s race being off Skate Island instead of at Tarbert.
Dinner has been organised upstairs in the Restaurant at Portavadie marina. Each boat crew is to pay the restaurant directly, choosing from a set two or three course menu.
Summer Muster – 23rd and 24th July – Craobh Haven
The format will be similar to last year, with a barbeque in the boat shed at Craobh Marina on Saturday evening followed by the Round Shuna Race on Sunday. See attached for further details.
Steve Pickles is organising this event, so if you are intending coming along please let him know , so he can estimate numbers for catering. Steve can be contacted on 01555 666348 or 07981443362. If no answer, leave a message or email him at stephen.pickles 'AT' btinternet.com
Autumn Muster 10/11th September
We are returning to Rothesay for this year‟s Autumn Muster. The restaurant at Mount Stewart has been booked and we are looking forward to a re- run of last year‟s enjoyable weekend.
We will be racing from Kip to Rothesay on Saturday with a pursuit race back to Kip on Sunday.
29th October Frostbite Race - Largs
A date to put in your diary-as usual this race will be starting at Largs and sailing round the Cumbraes.
Fri 9th December - Annual Dinner and Prize Giving
Another date to note in your diary. The Art Club has been booked again this year and new caterers have been engaged so we are looking forward to an enjoyable evening.

Photography Competition.
The annual photography competition has become part of the club‟s annual programme with judging taking place at the annual dinner. This year's competition is entitled “All At Sea”.
So get snapping

Log Competition
There is also a competition for best log. Jane Hinshalwood last year raised this to a new level and had a clear run. As there is a cup at stake, remember to write up your log on your summer voyages.  If they get the fingers tapping the iPads there could be an tense and exciting shoot-out between Dugald and Val Glen's account of their voyaging in Scandinavia and Robbie and Alyson Rodger's Mediterranean exploits.
Posted by Serpent Yacht Club at 22:15 0 comments

Tanit on the RORC Cervantes race. 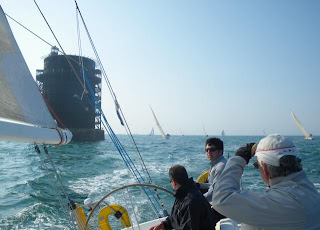 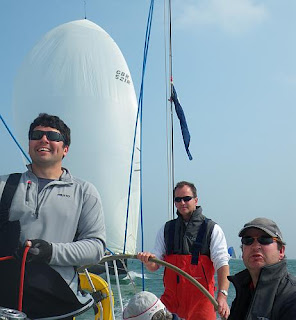 Three Serpents looking skeely-ish but about to be overtaken.  Tanit ended up with a respectable placing in class. Photos by Roisin.
Posted by Serpent Yacht Club at 22:30 1 comments

At Kip, Aquaholic leads the splash-in race on 20th March. As of about the same date Tulla is in also and Troikka followed on by 2nd April. On that day also Stewart Toy abandoned the lambing and set to work on OOTB at long last. Don't be fooled by the wide angle shot. Aquaholic does not have a stumpy wee keel! 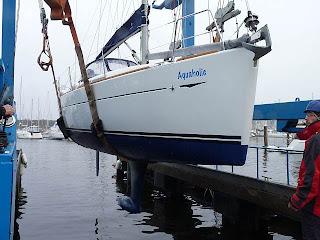 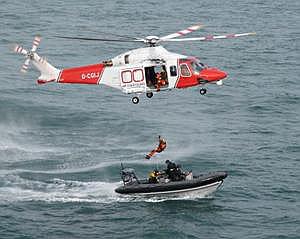 The consultation period ends at 5pm on the 24th March 2011. If anyone would like to see the full version of the letter from the Clyde Maritime and Rescue Centre, let me know and I’ll send them a copy. However I would urge you, if you feel strongly about this proposal, to make your views known.
Posted by Serpent Yacht Club at 21:42 0 comments

JANUARY NEWSLETTER 2011
A Message from the Commodore
During the Christmas and New Year period, we have had another severe, and this time earlier, winter which amongst all the disruptions of frozen pipes, treacherous roads and traffic chaos, forced us to cancel the Club Dinner and Prize Giving, an unprecedented event in the club’s history.
This was not an easy decision to take and I apologise for any inconvenience caused but in the light of so many cancellations it became obvious that it would not be viable to run the dinner. As a result any cheques that were sent to me to pay for tickets have now been shredded and will not be presented to the bank.
Although we considered re-arranging the Dinner at a later date in January, this proved to be impossible to organise.
However to allow those of you who were successful in the races to adorn your sideboards with silverware, we have decided this year to amalgamate the Prize Giving within the AGM and this combined event will be held at The Golden Jubilee Hospital on Monday 21st February.
I hope you will be able to attend and I look forward to seeing as many of you as possible at the AGM and Prize Giving.
Tom Barrie
Commodore

Annual Subscriptions
Your annual subscription is now due, so if you haven’t already paid by standing order could you please forward your cheque to:-
Val Glen, Treasurer, 9 Abercromby Pl, Stirling, FK8 2QP
Subscriptions have been held at £10 for single membership, £15 for joint /family membership. Cheques should be made payable to “The Serpent Yacht Club”.
Posted by Serpent Yacht Club at 21:33 0 comments