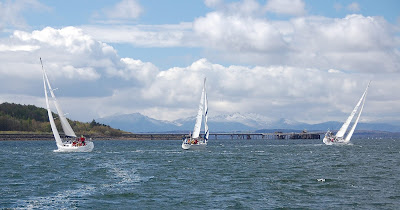 This was an event outwith the usual Clyde calendar and in electing to have a Kip start the Race Secretary had misjudged the starts of other clubs being convinced in his own head that they would be at Fairlie and Rothesay.  It was only on the Thursday night that it was found that Fairlie Yacht Club were starting their opening muster race to Holy Loch  off Kip at exactly the same time as our own proposed start.  After some frantic telephoning and negotiation, Mr Ricky Gray of 'Leomaris', the FYC start boat, kindly agreed to wait to provide a start for us at 11.30, fifteen minutes after the last FYC start.  However there were engine troubles for some Serpent competitors. After some last minute oiliness  Dugald Glen managed to get Tulla Mhor to the start on time but the Commodore and his gallant team were less fortunate. All seemed well until Out of the Blue's engine stopped and despite Stewart's best efforts on the water he failed to restart it. However this gave him the opportunity to take the following photos of the start before being towed back in to Kip by the workboat. 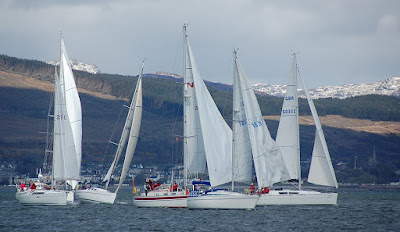 The course set was the south westerly option with a beat to Skelmorlie bank, across to Toward, across to another Skelmorlie channel buoy, up to Dunoon Bank and back to Kip - an estimated 16 miles approx. With OOTB missing there were nine starters and as these photo show the start was somewhat more competitive than Serpent starts hitherto. 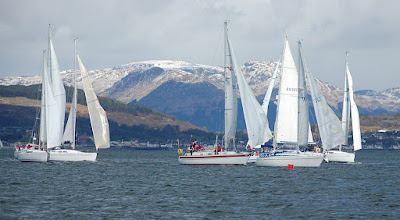 Mind you, Ataraxia had added some extra racing experience on board with Paul and Roisin Harris while Tulla Mhor had a professional in the form of Jon Fitzgerald although he was only there from Silvers to check on the rigging... 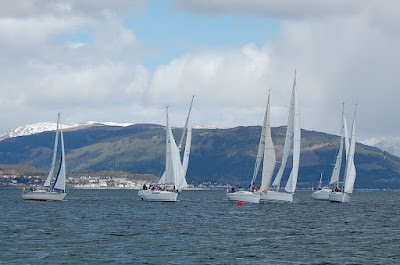 However all got away safely and we can certainly boast that the Serpent start was visibly more competitive than the Fairlie one.  In the above picture Troikka is hanging on to the pin end while Tulla Mhor powers through with split second accuracy. 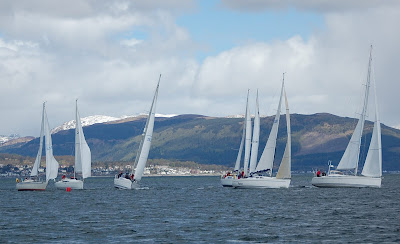 In this shot Ataraxia, Troikka , Aquaholic and Tulla Mhor are all making a respectable start with Silverjack and Black Pepper squeezing in at the pin end a fraction later.  Camus Bosta and Pondskater have stayed out of this particular engagement. 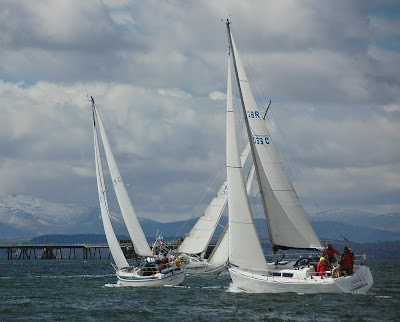 This is a great shot by Stewart as Tulla Mhor, Black Pepper and Aquaholic tack away from the Kip shore. 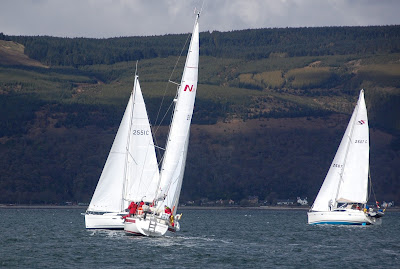 Here we see Silverjack, Pondskater and Camus Bosta on their way.  It was a brisk sail down to Skelmorlie Bank with about 16kts or so of breeze. The Clyde was sparkling in the sunshine and whilst it wasn't quite champagne sailing it could possibly have been considered champagne on ice as the snow on the hills might suggest.  It was more of a frostbite race than last year's. As the leading boats turned to beat for Toward a squall came gusting down the east Kyle somewhere near 30 knots which I thought appropriate for the occasion, given the accounts of that race 40 years ago. However we all ploughed on with some boats reefing and by the time we rounded the buoy the wind had all but disappeared.  Thereafter it was a slow predominantly broad reach up to Toward with fickle wind.  Tulla Mhor performed a horizon job but with Ataraxia hanging on not far behind, rounding the Dunoon cardinal into a stiff beat back to Kip arriving around 3pm. 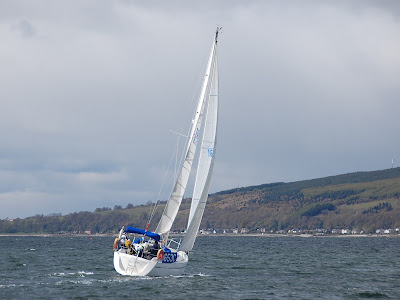 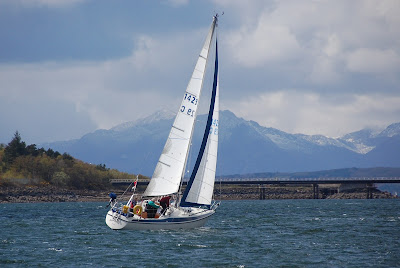 It was clear that the conditions suited Neil on Camus Bosta as she romped back and indeed the rest of Class 3 completed the course apart from Black Pepper although Don later claimed that he had enjoyed the sail as did everyone.  The results have already been posted down the page.  Ataraxia took Class 2 with Tulla Mhor second.  Camus Bosta was first in Class 3 (although ahead of Tulla on corrected time) with Emma Louise second.   The results were read out that evening in the Kip Chartroom where crews enjoyed a set dinner.

Posted by Serpent Yacht Club at 22:10