After the exertions of the night before there was a certain Sunday morning bleariness evident among certain Serpent crews, particularly since the sunshine of the preceding day had been replaced by fine drizzle and the familiar dreichness.  However it was necessary for all to set to the unfamiliar task of dressing overall for the proposed Sail Past at 11am.  There was the odd opt-out who had been convinced by the forecasts that a mighty tempest was about to sweep the Ashton shore but the rest of us soldiered on with a tangle of flags and knickers untwisted.  Strict instructions for the timing and order of the Sail Past had been issued previously and so the Serpents departed Kip en masse with flags all a-flutter and proceeded to roll their way under motor  for the Cloch.  Once around that headland the breeze was more favourable, the surface more settled and miraculously some hazy sunshine began to appear to improve the visibility.  In due course, with the Commodore's Moody  'Out of the Blue' still suffering from fuel pump issues and with her crew aboard Tulla Mhor,  Tom Hutchinson on Aquaholic,  was the designated Red Ten to give the signal to form up for the flypast although in line astern rather than the Diamond Nine which some seemed to be attempting. 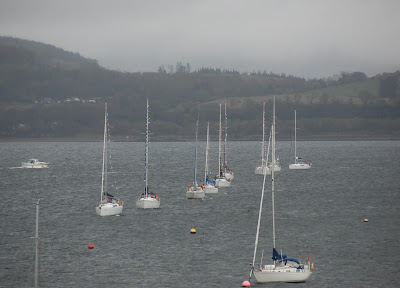 However to general astonishment it all came good in the end and the procession made its way past the Royal Gourock clubhouse, where, on the platform, the Serpent Yacht Club founding Commodore, Bobby Corbett, the medic who 40 years previously had conceived that extraordinary idea of a yacht club for health service personnel, was placed to take the salute, accompanied by RNCYC Commodore Charles Darley, RGYC Commodore Ian PC Mackenzie and current Serpent Commodore Stewart Toy and  host of spectators.  Dipping ensigns on modern yachts is more a business of pulling wooden sticks out of sockets rather than anything more poetic but once duty was done it was time to high tail it back to Kip and return to RGYC by road for the lunch. 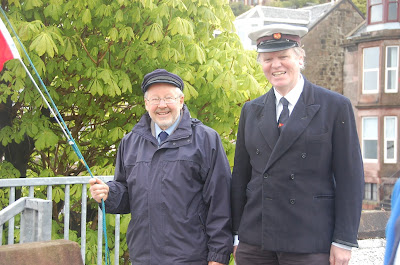 The idea of the Sunday lunch at Royal Gourock had been to assemble as many as possible of the Serpent members from former days and who have now swallowed the anchor, especially the surviving founder members including past Commorodores who obviously are now well into their retirement years although it should be noted that among them there are many with impressive logs with circumnavigations and long distance cruises to their credit.  It was good to see so many and in fact seventy souls were booked for lunch with a fine turnout including as a guest, Duncan Chalmers of Kip Marina who has given the Club support over many years. 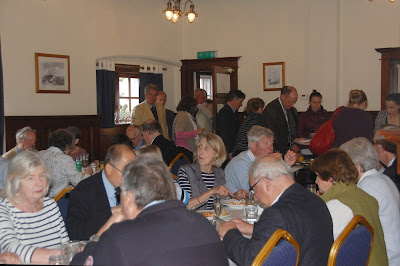 After a convivial prosecco-fuelled gathering in the lounge, the RGYC catering staff served an excellent buffet lunch after which the Serpent Commodore presented commemorative glasses to the sail past participants and Bobby Corbett gave a commendably concise reflection on the formation of the Club all those years ago.  Undoubtedly times are different now both in sailing and elsewhere but the Serpent Yacht Club remains true to its original ethos of enjoyment, socialising, friendly rivalry and the after-race muster rather than hard core racing.

Posted by Serpent Yacht Club at 23:02