The Serpent Yacht Club was determined, if it was at all possible, to run at least one event in 2020. It was decided that the Frostbite race was the only possible remaining event as that race does not usually involve any organised apres-sail social activity.  Consequently the date was brought forward to October 3rd and arranged in great detail to be fully compliant with the government guidelines for sporting events as interpreted and promulgated by the RYA.  Stewart Toy was encouraged to volunteer to be the club Covid Officer for the event and this turned out to be a not unduly onerous task given only four entries of lightly crewed yachts. As can be seen from the photos, wind was in short supply.  The post race comments received here were of a general admiration of Tulla Mhor's new post World Arc laminate sails and a unanimous wish that next year we may have sailing with proper Serpent sociability. 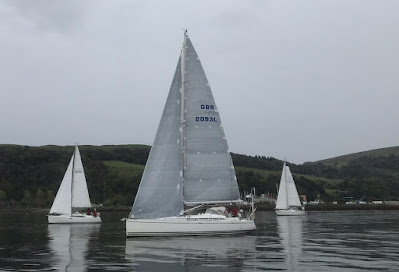 Over the preceding week the weather forecasts alternated between gale force winds and little wind. Luckily the latter prevailed and four boats lined up at 11:00am off Largs sailing club. Three of the boats were crewed by the husband and wife teams of Stewart and Catherine Toy, Peter and Marian Jennett and Dugald and Val Glen, with the Gillies brothers accompanied by Tom Hutchinson, sailing on Silverjack. 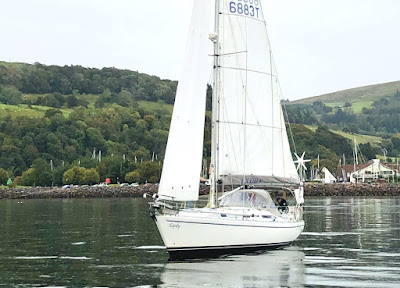 Stewart and Catherine Toy undertook the duty of start boat on Katya and set the most appropriate course round the Cumbrae Island leaving it to port. The start was challenging with little wind and a strong north going tide which caused Silverjack, helmed by Tom Hutchinson, to drift across the line early. After being recalled by the officer of the day Silverjack restarted and with Exody and Tulla Mhor [with a beautiful set of new sails] headed towards HUN1 at a snail’s pace. Tulla Mhor reached the mark first and picked up stronger winds which promptly disappeared as the rest of the fleet struggled on. Katya, having completed duties as start boat, set off 12 minutes later joined the three slower boats as they drifted onwards towards the mark. Katya was forced to take avoiding action to prevent the tide pushing them onto HUN3 as the tide turned at the north end of the island.

Both Exody and Katya then picked up a small breeze and rounded HUN1 shortly followed by Silverjack and the rain.

Tulla Mhor, having disappeared over the horizon, finished racing at the TAN SPIT BUOY with the rest of the fleet arriving considerably later in light winds.

The results were as follows:-

All crews expressed their delight at being able to race again in a club event, unfortunately without any social interaction being allowed before or after the race.

Big thanks to Stewart and Catherine for starting the race and providing Covid risk assessments etc. Also to Graham and Charles Sutherland who organised the race and to everyone who turned up on the start line. Let’s hope we can race again soon. 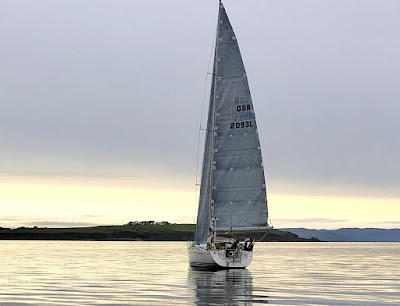 Posted by Serpent Yacht Club at 21:54