Report by Graham Gillies
It was a thin but hardy turnout for this year’s Frostbite Race. Potential participants may have been discouraged by the arrival of the remains of Hurricane Lorenzo with its potential high winds and torrential rain. In the event, the three participating yachts were met on the day with fresh winds and dry conditions.
The easterly wind at the start near Largs Yacht Haven provided flat water and unsettled skies. The choice of sail setup was a tricky call in the minutes prior to the start with wind speeds varying from 10 to 30 kn. 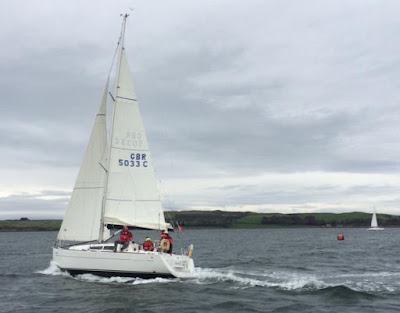 Aquaholic made a perfect start crossing the line just seconds after the gun with Tulla Mhor crossing the line close on her heels. The chosen course was a clockwise circumnavigation of Great Cumbrae, a modest challenge for those global circumnavigators. Silverjack joined the pursuit 10 minutes later once they had stowed the starting paraphernalia. 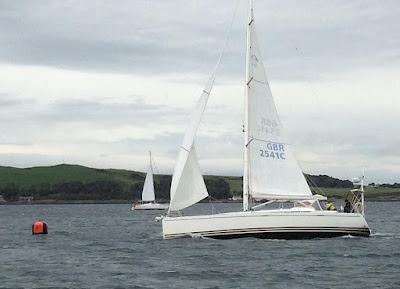 The wind lightened as they approached Hun 9 buoy at Farland point allowing some close sparring between the leading boats. It was soon a hard gybe round the mark at Portachur.
The wind lightened a tad in the lee to the west of Cumbrae but remained steady and Tulla Mhor’s long legs increased the gap from Aquaholic. Her handicap of 6.5 required Tulla Mhor to maintain a fast pace.

To the north of Cumbrae, the wind strengthened and sheets were hardened up for a close fetch to Hun 1 with a light chop now affecting the speed. Tacking round the mark, it was a gusting 25kn close haul to lay the finish line. The race was completed by lunchtime with one gybe, one tack and as yet no rain; allowing the fleet to scamper home and pack the sails for the winter layup before the promised downpour. 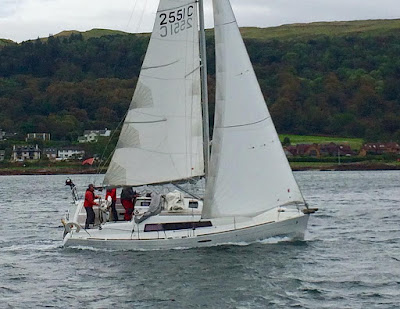 Silverjack easing the sails as they approach the finish.

Posted by Serpent Yacht Club at 00:32