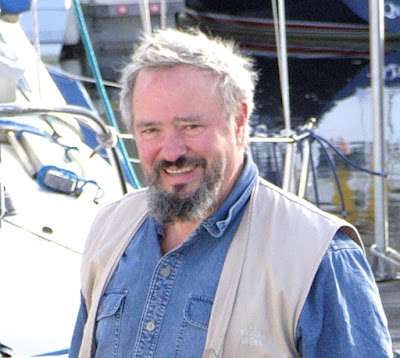 Neil joined the Serpent Yacht Club in its founding years and rarely missed a Club event in four decades. He was a committee member for many years and served as Race Secretary and Commodore.

His extrovert personality and generous nature drew a wide circle of friends. He was a people person, a gifted raconteur, compassionate and always made time for folk. He managed to combine his passion for sailing with a busy career as an Obstetrician and Gynaecologist.


Neil was something of a legend in sailing circles. His first boat, ‘Trebor’, was a 24 ft wooden yacht (Clyde 19-24 class) built 1897, in which he cruised from the mooring at Clynder to Skye with Marie, without an engine or a loo.

In 1981, they bought Lola, another elderly classic yacht. Many will remember the exploits of this 1925,12 tonne wooden Ketch, in which he raced with family and friends on many offshore passages, cruising widely from Spain to Scapa Flow. In four hectic summers, 1984 – 1987, Lola won the CCC blue water race to La Trinité France; returned to Benodet the following year; sailed from the Clyde to La Coruña in 1986 and to Orkney in 1987. His fondness for Lola never left him.

By 1989, a young family necessitated a larger and drier boat, so Neil reluctantly embraced GRP in the purchase of Corsair. He continued to sail extensively and enjoyed many family adventures with Ali and Eilidh, often in company. He was fond of barbecues and had an affinity for less sheltered anchorages – Pladda was a favourite.

Despite serious health challenges, he remained energetic and enthusiastic. In 2010, he purchased Camus Bosta, a 42 foot Southerly, and in recent years he achieved two long held ambitions: to visit St Kilda and to sail round Ireland. The Irish trip was completed two-handed with his son, Ali.

Neil was always passionate and enthusiastic about everything he tackled. His passion overflowed – sometimes to excess.

He was loved by many and will be sorely missed.