It wasn't a good day to be race officer.  With zero wind off Kip a postponement ensued followed by the abandonement of the start line and a search for another one with Warden Bank the chosen unlikely spot. There wasn't any wind there either but adopting a probably ill-advised Show Must Go On mindset,  a race (on Course 3 substituted for the original over-optimistic course 1)was started as competitors drifted slowly backwards from the line. 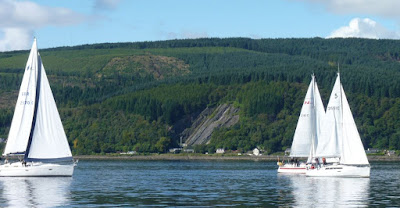 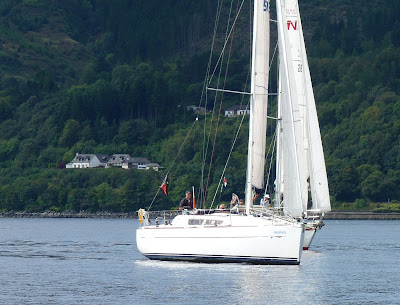 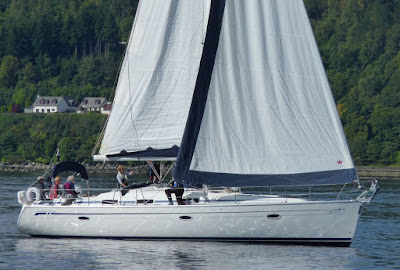 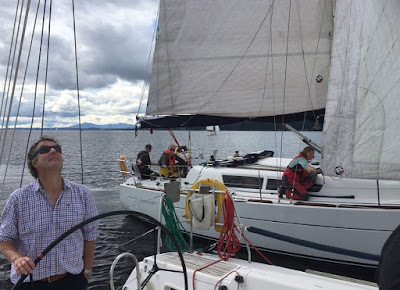 Eventually it became a a slow drift forwards with various patchy zephyrs being picked up from the SW, the forecast NW backing northerly having made a total non-appearance across the upper Clyde.  Progress being so pitifully slow there were various course shortenings and course changes with eventually, the the Ashton safe water buoy chosen in complete desperation as the finish mark. 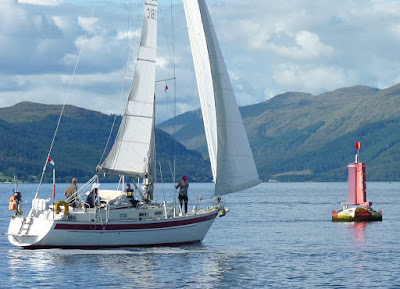 We wouldn't normally be so irresponsible as to break the rules and choose a buoy in the middle of a shipping channel and with the Clyde having been so relatively deserted we weren't to know that a huge tanker and a container ship were to appear just as we were finishing. Anyway we survived without impeding the commercial traffic in any way and hopefully Clydeport will not be writing to the Commodore. 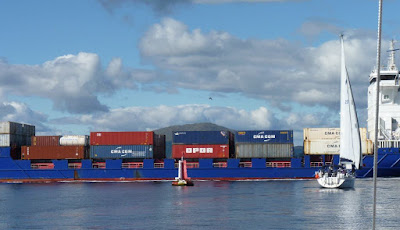 After that it was a brisk motor up the Holy Loch without getting in the way of the Pipers, Flying Fifteens and dinghies in the Polaris Regatta which were finishing an excellent race in ideal sailing conditions. 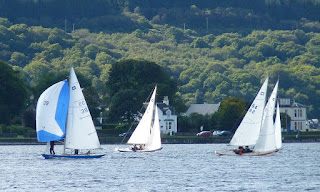 We had thought that space had been reserved for the club on the inside of the breakwater but Aquaholic, having arrived first was the only one to finsd a space and the rest of us  found that actually the pontoons opposite had been reserved and Exody was already there having cruised in earlier.  With congestion and the brisk northerly breeze berthing took some of us more than one attempt but eventually all were in and bottles were opened in the early evening sunshine.  Peter Jennett operated a dinghy ferry across to Aquaholic where a gin-fest was proceeding.  Some of us withthe appropriate bonus cards took the bus into Dunoon (the driver was a comedian of the first order and deserves a mention) while the remainder followed in Martin's taxi service to the La Cantina restaurant where the meal had been organised and was served efficiently.
Much much later, partying from the Polaris regatta yachts carried on past the wee small hours but most of us slept right through it.

The results of Saturday's so-called 'race' are actually slightly different from those announced in the restaurant - as a result of an arithmetical error in the calculation of Aquaholic's time for which the compiler blames variously sunstroke, gin and a party going on in the cockpit.  Troikka recorded the fastest corrected time but the Race Officer is of the opinion that in the circumstances of Saturday the 10 minute allowance routinely accorded to the start boat should not really apply and so Aquaholic remains the winner of Class 2 albeit by a whisker. In the overall rankings the mighty Pondskater actually comes second and of course is the winner of Class 3 followed by Silverjack and Spirit.

Posted by Serpent Yacht Club at 20:25