While the Portavadie race was going on another Serpent yacht was taking part in the inaugural St Kilda Challenge. This was Mhojo Mhor, the Starlight 35 formerly known as Jomora and now owned by Dr David Murray of Lochcarron. Amongst the crew of 5 was Dr Charles Sutherland and so this qualifies to be described here as a legitimate Serpent-related exploit.  It is a new event promoted by Comann na Mara of Lochmaddy with the race organisation in the hands of the Clyde Cruising Club and run under IRC handicap.  In the extraordinary sunshine which we had been enjoying, yachts gathered in the tiny marina at Lochmaddy and were given a warm welcome and an impressive reception with unlimited wine and seafood nibbles. Other events and concerts were being held giving a village festival atmosphere. 15 yachts were entered for the non-stop race around the entire archipelago with another 16 registered for the flotilla cruise to Hirta with a proposed landing at Village Bay. 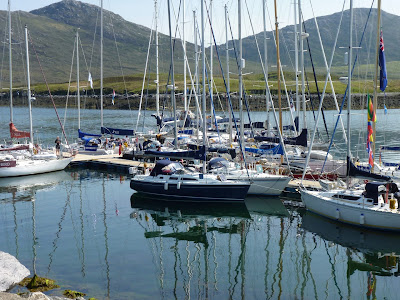 With the start being on Friday at 9.30am this meant a very early start to motor the 20 miles or so from Lochmaddy to the start line at the west end of the Sound of Harris. I think sailing to St Kilda is a trip which really calls for a Goldilocks type wind but in the event there really was too little but this was preferable to too much and the calm weather which preceded the event meant that the Atlantic swell was very much less than it might have been.  The fleet comprised a number of pretty serious looking racers with the numbers made up of more pedestrian cruisers of which Mhojo Mhor was the smallest to finish so we were pleased to find ourselves, after a reasonable start, up amongst the leading boats. Once spinnakers were hoisted we gradually fell back from the quicker boats. Others faring more poorly with the fickle breeze retired and in the end there were only 7 finishers. 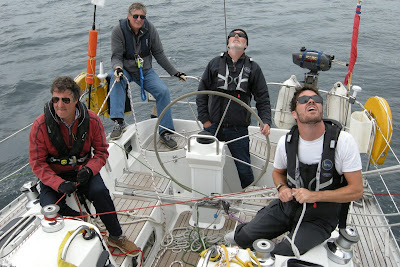 We arrived at St Kilda around 7pm with the archipelago shrouded in mist but as we proceeded around the eerie rocks of the west side of Hirta the spinnaker came own and a stiff beat developed as the wind rose and we headed north east to clear Boreray. 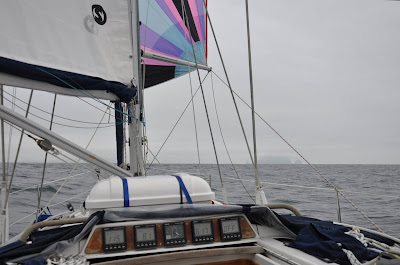 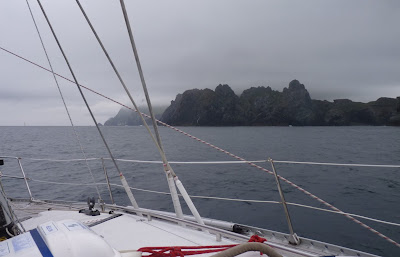 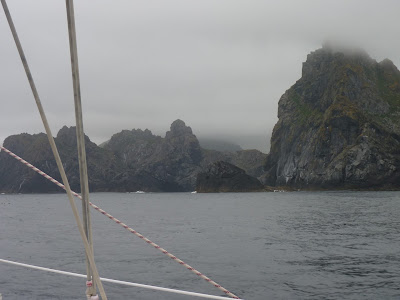 As darkness fell so did the wind and it was a trying job to keep the boat moving at all in the ever-present swell particularly as fatigue was beginning to set in and making disorientation in the darkness hard to avoid.  With the gradual reappearance of light so appeared the slightest of zephyrs and any thoughts of retiring were put aside.  Boat speed improved and as the hours went by spirits rose as we realised that finishing within the 3pm Saturday time limit was probably possible.  The final leg with the Sound of Harris in sight seemed to take forever and to our chagrin the wind died to just a few knots while on the AIS we could see boats ahead finishing with good boatspeed. Eventually we ghosted over the finish line, last to finish after 28 hours of sailing and to our surprise found ourselves awarded 4th place on handicap.  First place went to Moonstruck Too, a serious racing J122 from Port Edgar. At the prizegiving, medals were awarded to all crew members.

Reports from those who had cruised were that they had landed and were delighted to have had some time ashore before the mist came down but then followed an uncomfortable night in Village Bay.  On Mhojo Mhor we were all glad to have taken part but would we do it again? Probably not.
Posted by Serpent Yacht Club at 11:24