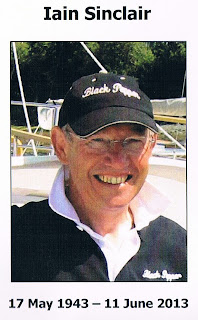 The club mourns the unexpected and untimely loss of Iain Sinclair, a much loved member and former Commodore.  His final illness was disclosed only a few weeks before his death - he had just been to Switzerland to visit his sister for his 70th birthday -and comes only a year after the loss of his dear wife Pamela, also a true friend of the Club.  It was said that his only complaint was that he had hoped that he might have a little longer.  Those who met him only through the club would recognise him as a welcoming, kindly and thoughtful man with a keen sense of fun. He was also a telented artist and had numerous other interests besides.  He was a first class Commodore and his wise advice continued to be valued by the present Committee. He will be greatly missed.