The magnificent weather held for the annual Craobh gathering and the photo shows generations of Serpents in the evening sunshine and with an unmistakable boatyard backdrop. 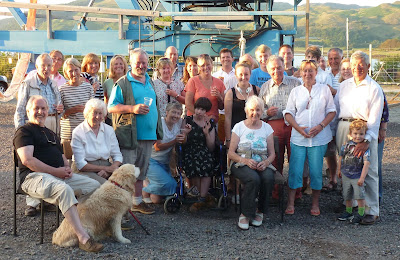 The absence of a band did not seem to dampen spirits and Steve Pickles and his team delivered their usual high standard of barbequeing with no apparent dangers. 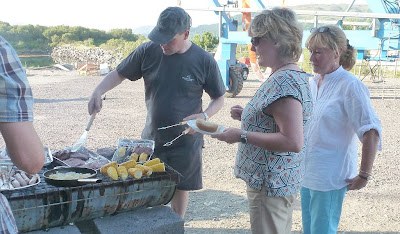 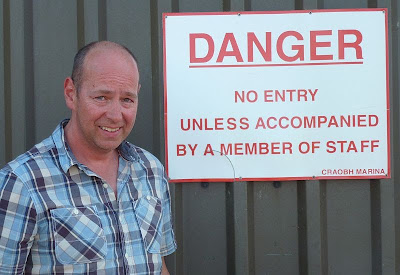 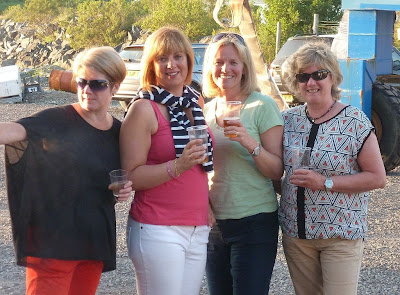 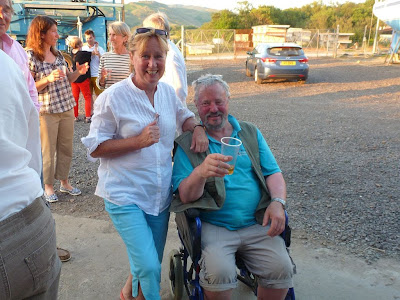 I don't think it's known as a regular Serpent activity but the weather was such that some of the BBQ team opted to cool off even before the fire was lit. 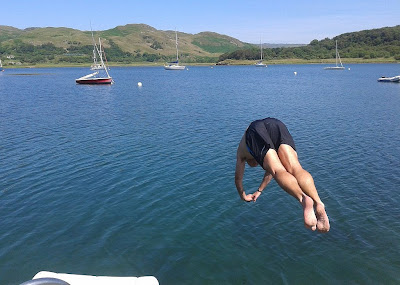 Despite there being no band, Stewart Toy provided recorded music and dancing continued until late although the present writer, having been designated Race Office for the next day, retired to his bunk. Similar sunshine and light fickle breezes were once again the feature of Sunday morning. Out of The Blue with a crowd of novices on board appeared late from the marina and took what they regarded as a cautious start although there was suspicion that fishing was their priority. Here the Troikka sheep mascot gives a knowing leer as OOTB goes past with the appearance of no hand on the wheel. 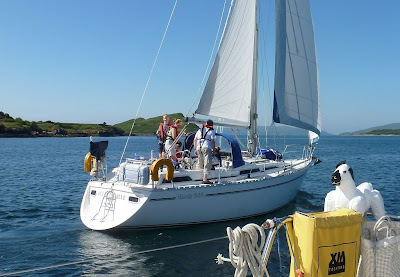 On Troikka we were quite pleased to be able to offer both flag and sound signals then gybe round and cross second boat over the line. Alas the sub 10kt breeze did not suit Camus Bosta but at least they were not fishing intentionally. 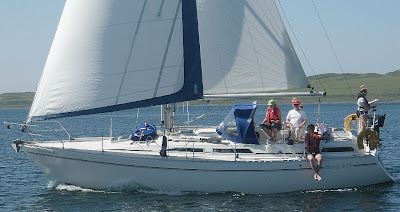 It was an easy fetch to the South end of Shuna and Troikka had to work quite hard to fend off Ataraxia. 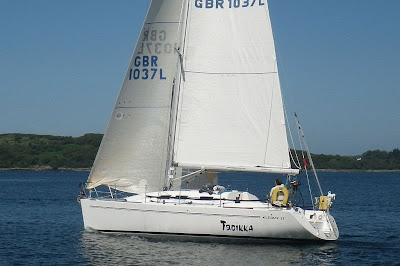 Although the southbound leg was a very pleasant sail, at least for those of us who were not hopelessly undercanvassed, the wind began to fail as the front runners reached the downwind turning island. It became apparent that the slower boats were becoming becalmed and the course was then shortened at the north end of Shuna. Unfortunately, by this time the wind had failed altogether and there was at least a 30 minute delay before Ataraxia drifted over the line. Camus Bosta exhibited one of the disadvantages of having two rudders by hooking a lobster pot line on one of them but despite this delay managed to beat OOTB by 30 secs on corrected time. As far as the preliminary calculations go, and assuming Troikka is a legitimate finisher the placings are 1. Troikka, 2. Ataraxia, 3 Camus Bosta, 4. Out of the Blue.  The times however will be passed on to the Club Race Secretary for the proper calculations to be made using checked handicap figures.
Once all had finished, Troikka rafted on to Ataraxia, anchored in the middle of the Shuna Sound, to join in their lavish lunch activities. Serpent days out do not get much better. 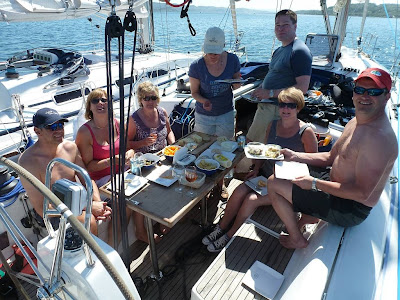 As a footnote, much missed were the cheery figures of Iain and Pamela Sinclair who as Craobh berthholders were always a sure presence and usual high scorers in the race. It transpires however that their boat 'Black Pepper' has been left to Don Gillies and should he continue to turn it out in Serpent events as we hope he will, there could be no better tribute.

Posted by Serpent Yacht Club at 16:02