The 2013 Serpent YC AGM took place on Tues 12th February in a new venue, a seminar room of the City of Glasgow College, thanks to Peter Jennett who works there. Regrettably, the Commodore was unable to attend, being otherwise occupied with obstetric duties with one of her prize ewes which was about to deliver highly valuable triplets.  In her shoes, but not her underwear, as he was careful to emphasise, was Stuart Toy who conducted the meeting without obvious mishap.  And here are the said lambs.

According to standard practice, after the usual formalities, the commodore substitute presented a review of the year's activities which in general had been fairly successful.  There was a distinct lack of photographs from the events so members are reminded to get their cameras out, not just for the annual review but for the newletters and this blog.  The appointment of the existing committee members was approved but with the standing down of Alan McLeod, there is a place for another steward.
Thanks to Iain Sinclair's fancy financial footwork the Treasurer was able to present accounts which balanced perfectly and we are grateful to Iain for taking on the auditor's job once again. There was discussion about the raising of the membership fee from its present almost negligible level.  Iain Sinclair pointed out that such a change might lead to the standing orders of a number of now inactive members falling into abeyance and asked if that had that been calculated.  Any increase should be of a sufficient level to compensate for that and the chairman agreed that this would be reviewed by the Committee. There was a certain amount of discussion following Tom Hutchinson's proposal that the Club should consider following the CCC's action in converting to a limited company to protect the members from exposure to the effects of legal action against the club. Whilst this was considered a somewhat unlikely eventuality, it was agreed that the Committee should investigate this and report back.  Tom also noted some potential clashes in the sailing programme with with other  Clyde events and it was agreed that the sailing calendar would be reviewed. Marcus Stone, an experienced sailor who works in Medical Physics and who joined on the night was welcomed to the club and with that the floor was handed over to Steve Pickles, who, assisted by his wife Susan and crewman Trevor, gave a most interesting illustrated account of their ARC trip in 2011 on board a 20m Tarbert built classic yawl. 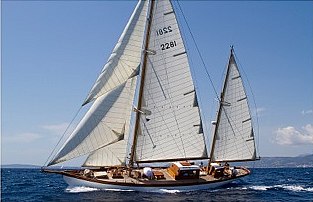 Clearly no hardships were endured and there was undoubtedly no risk whatever of any dietary deficiencies. Seamanlike chores included loading the washing machine and hoovering the tartan carpet. 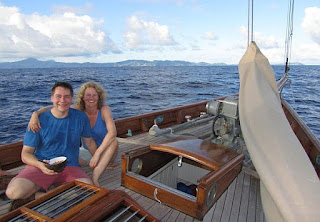 The meeting closed in good spirits and we look forward to the coming season and some good sailing.
Posted by Serpent Yacht Club at 11:55