There was no possibility of frostbite on this year's so-called Frostbite Race.  Having brought the event so far forward in the calendar the Committee is duty bound to rename it more appropriately. That being said the conditions could have been worse.  The Race Officer and his loyal assistant on Troikka were concerned about starting the race in so little wind but elected to run an anticlockwise circuit of the Cumbrae as the perceptible breeze appeared to be coming from the north west rather than the east which was forecast. The picture below by Graham Gillies illustrates the conditions. 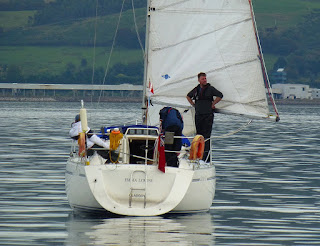 Nevertheless a little breeze filled in and the race started on time. Those who displayed carelessness in not being close to the start line or who were close in to the shore where the wind was completely absent suffered badly.  Aquaholic and Tulla Mhor made a safe getaway but soon found themselves becalmed briefly.  It was certainly not the conditions which favour Camus Bosta and I think Neil would prefer no further comment.  For Class 2 once Troikka had put away the starting gear and joined in an enjoyable little beat to Hun1 ensued with Troikka first to the mark closely followed by Tulla Mhor. Once round the west of Cumbrae the mighty Arcona soon started to gain on the Elan 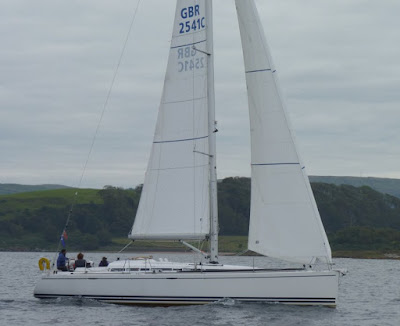 but looking back it was worrying to see little evidence of Class 3 approaching HUN1.  However, following a few calls on VHF it transpired that Class 3 were prepared to sail on.   Troikka and Tulla Mhor eventually reached the Tan Spit buoy together, Troikka giving water to Tulla and proceeding across Millport Bay 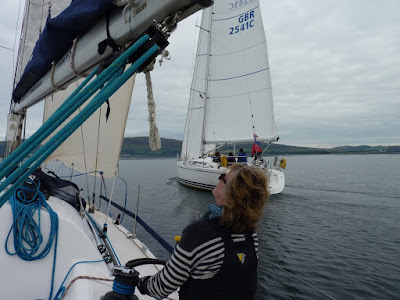 but in a declining breeze until it ran out completely and we both stopped, Troikka going backwards in the tide of this notorious whirlpool.  There the two boats remained for at least 20 minutes until Aquaholic appeared, creeping along the shore.  Eventually the skeely Hutchinson manipulated Aquaholic around the Hun 9 buoy just ahead of Tulla Mhor and where it was decided to finish the Class 2 race. Troikka meanwhile had drifted southwards on the tide with little hope of reaching the buoy in the next 30 minutes and so she retired.  As there was no sense in asking Class 3 to put up with this ordeal it was decided that their race should be stopped at the Tan Spit buoy where all, with the notable exception of the Commodore had recorded their times, as per the race instructions. We were pleased to see new members Ken and Elizabeth McCartney out on Kerrera Moon, assisted by Martin Yuill and in fact all of Class 3 expressed their satisfaction with the race albeit one in which the conditions were far from ideal. 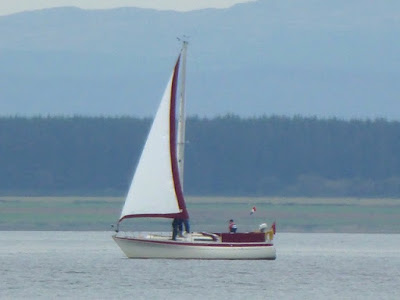 The results are below.  The Commodore was saved from disqualification by Graham Gillies who noted that Emma Louise arrived at the Tan Spit approximately one minute before Silverjack and he has accordingly been accredited with this time.  The results are below: click the table to see it clearly

Posted by Serpent Yacht Club at 21:41