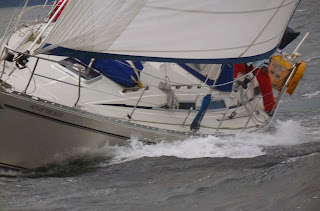 With winds rising to Force 6, five intrepid yachts took part in a fast moving race around Cumbrae. Camus Bosta took up position as Committee Vessel and the race started with Troikka, Aquaholic and Emma Louise tight on the line on a starboard tack. Troikka started to leeward of Aquaholic until both tacked on to port, close to shore thereby allowing Troikka to get clear to windward and set the pace while Emma Louise, well to leeward was able to tack onto port and into clean air. Meanwhile, Out of the Blue was ambling down the channel from Kip post a leisurely breakfast fry up as Stewart thought the clocks had already gone back by one hour - arriving a tad late on the line just as Camus Bosta was starting! 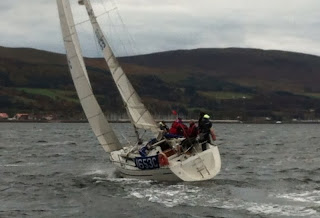 In Class 1, Aquaholic got into the groove on the beat to Farland Point hot on the heels of Troikka while in Class 3 Camus Bosta was in pursuit of Class 3 Emma Louise and OOTB was making a valiant effort to close the gap. Troikka and Aquaholic set spinnakers at the Tan Spit Buoy but by the time they reached the top of Cumbrae, Aquaholic decided to make life more interesting by broaching spectacularly in order to give Charles, Anne and crew on Troikka a 'sporting chance'. Alas, this was to no avail and Aquaholic crossed the finish line less than a minute ahead of Troikka on corrected time. With the wind rising, Camus Bosta continued to make ground on Emma Louise and both simultaneously tacked over the finish line, but with Camus Bosta the clear winner on corrected time. 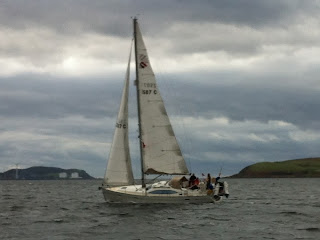 OOTB finished shortly thereafter having made up considerable ground. 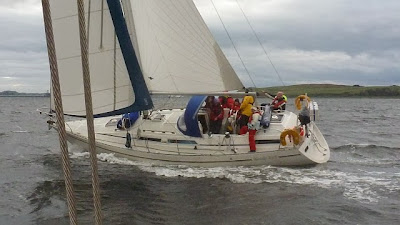 Events were however to take an even more interesting turn. Troikka suffered engine failure in the Kip entry channel* and OOTB arrived in time to take the embarrassing photo of them under tow. However with all the excitement over and and safely tied up in the now driving rain, the Troikka crew gatecrashed OOTB where the Commodore kindly ‘spliced the mainbrace’ in characteristic generous style. 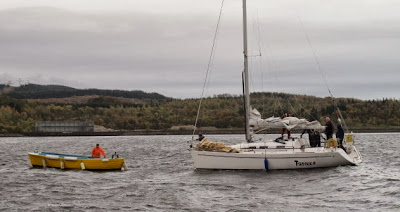 Meanwhile Emma Louise headed back towards Ardrossan in rough seas and wind gusting Force 7. After 3 hours motoring into a southerly, all were glad to surf into Ardrossan Harbour (as you do down there) in a darkening sky and the previously mentioned driving rain. Just as Emma Louise entered the inner harbour the Marina security shouted, "Is there anyone else out there" (clearly not – they were all sensibly in the pub) and immediately proceeded to close the storm gates! It was a blast of a day to end the season.

*subsequently it was found that the diesel tap had somehow been turned off
Posted by Serpent Yacht Club at 23:22